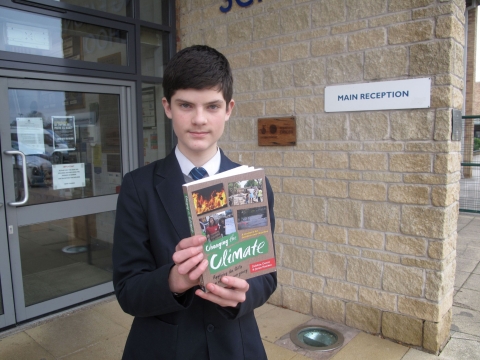 Teen’s tips for environment-saving include saving shower water to flush the toilet with, using a second-hand phone, and walking or cycling wherever possible

A teenage eco-warrior from Derbyshire has won a top award in memory of Princess Diana for his tireless campaigning work on climate change.

Jamie Hawker, a 15-year-old pupil of The Long Eaton School, is one of the latest recipients of the Diana Award, a global scheme celebrating young people’s efforts to make a difference.

Jamie has been extremely concerned about the environment from a young age and has over the last few years taken his fears to the next level by giving talks on plastic pollution; spending the 2020 lockdown co-writing a book with his parents called ‘Changing the Climate’, and undertaking a series of personal pledges to try and reduce his carbon footprint plus raise awareness about the seriousness of the issue.

Award organisers said the prize was the “highest accolade a young person can achieve” for social action or humanitarian efforts, and that Jamie had won it for going “above and beyond” in his daily life “to create and sustain positive change”.

Jamie said: “When I first heard I’d been given the award I was overwhelmed because I didn’t realise what I was doing had been noticed in that way, but I now realise I must have been making some difference, so it was really nice to get that recognition.”

His mum Debbie added: “I’m really pleased for Jamie. I think he deserves this. I’m proud of him for what he’s done, although he didn’t do it to get an award. He did it because he believes there’s an important issue here about the future.”

The Hawker family are all undertaking a variety of eco measures to try to reduce their own carbon emissions. Jamie said he uses a second-hand mobile phone, walks to school and eats very little meat. The family also do their bit by helping distribute food that would otherwise be thrown away by supermarkets by collecting and distributing it through the food app ‘Olio’.

Debbie said: “There is just so much food waste that previously would have been slung into landfill, producing greenhouse gases and not going to people who would appreciate it. Olio works by getting food collected and sorted and given to people who want it, instead of that.”

Jamie said: “I play a role by collecting the food and putting it in the right boxes for people. And actually some of the food we give away is also helpful because there are some people who are really struggling with the six week holidays if they are usually on free school meals and have little to eat.”

Among the more unusual measures the Hawker family have embarked upon is saving precious resources by flushing their toilets using left over water from their showers, which they collect either by putting the plug in the bath or by catching the run-off in a washing up bowl.

Jamie was put forward for The Diana Award by a national organisation called Green Agents of Change. He has also been named a ‘Net Zero Hero’ by Derbyshire County Council for his eco-work.

He said the recent heatwave, which saw temperatures across the UK break all records by going over the 40 degree barrier for the first time, had only redoubled his focus on trying to do what he could to help the environment.

“Over those two days, it was clear this was obviously about climate change,” said Jamie. “It wasn’t just about the weather getting very hot, because those records have been there for over a century, and it’s clear the world is heating. And the UK broke the temperature record by over one degree, which is a big margin when you consider records are usually only broken by a few decimal points of a degree. It really is bad. It really is happening because of humans. I hope governments will pay more attention to it.”

The Long Eaton School principal Richard Peel said: “We are so proud of Jamie for being given the recognition of the prestigious Diana award. It’s just reward for the amazing efforts to which he has gone to make us all more aware of our environmental impact. We’re an eco school at Long Eaton and try to run things as ecologically as we can. I know a lot of our students have congratulated Jamie on his environmental work and I’m delighted to see him pursuing it.”

Tessy Ojo, CEO of the Diana Award, said: “We warmly congratulate our new Diana Award recipients from the UK and across the world who are changemakers for their generation. It is especially poignant as we remember Princess Diana twenty-five years on. We know by receiving this honour they will inspire more young people to get involved in their communities and begin their own journey as active citizens.”