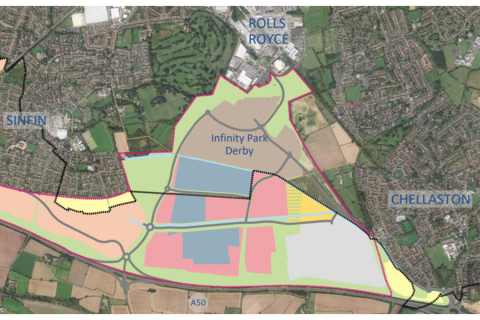 Projects which could create thousands of new homes and jobs in Derbyshire have received a £70 million boost from the Government’s Levelling Up Fund.

In his recent Autumn Budget and Spending Review, Chancellor of the Exchequer Rishi Sunak announced the first round of winners from its £4.8 billion Levelling Up Fund.

Out of the £1.7 billion announced, the South Derby Growth Zone and Infinity Garden Village received the largest single allocation of just under £50 million.

The money will pay for a new junction on the A50, south of Derby, unlocking a greenfield site where new homes and industry will be located.

Elsewhere, the Chancellor also confirmed that Chesterfield is to receive just under £20 million to boost its town centre and cultural offer.

Bids were submitted to the Levelling Up Fund by local authorities across the UK for local infrastructure improvements, such as regenerating town centres and high streets, local transport upgrades, and investment in culture and heritage.

A total of 105 areas have been allocated cash from the fund, with the biggest single grant, worth £49.6 million, going to the South Derby Growth Zone/Infinity Garden Village.

Straddling South Derbyshire District Council and Derby City Council local authority areas, Infinity Garden Village is a proposed residential development, south of Sinfin, which aims to deliver 4,750 new homes. It is one of 14 garden villages to be built across England.

Developers have expressed an interest in the scheme, which is currently in the planning stage.

The other element of the scheme involves creating a huge extension to Infinity Park Derby, stretching from the A50 to Rolls-Royce, which would deliver thousands of new jobs.

Elsewhere, Chesterfield Borough Council has secured almost £20 million of government funding following a successful bid to the Levelling Up Fund.

The cash will be used to further boost the town centre and enhance its cultural offer.

£11.4 million will be allocated towards the cost of a £15.6 million project to remodel and refurbish the Stephenson Memorial Hall, extending the Pomegranate Theatre and reconfiguring and modernising Chesterfield Museum - introducing new gallery space, a café bar, education, and community facilities.

The remaining £8.5 million will be used to further regenerate Chesterfield’s historic town centre, with investment centred on four key public spaces and the connections between them – Corporation Street, Rykneld Square, Market Square and New Square.

Councillor Tricia Gilby, leader of the borough council, said: “This is fantastic news for Chesterfield.

“The funding that we have secured from the Government’s Levelling Up Fund will complement the significant investments the council and its partners are already making in Chesterfield town centre and will ensure that we can continue to create a better future for our market traders, retailers, residents, and businesses.”