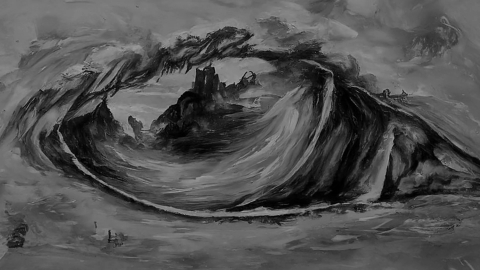 Two Derbyshire filmmakers are set to release a world first in animation having used artificial intelligence to pioneer a brand-new filmmaking process.

Directors Bethan Coolin and Samuel Poyser have combined traditional filmmaking with cutting edge AI modelling technology which has helped them to bring their vision to life.

Pearl Dog is the first short film to be created using this hybrid technique which sees each frame of film painstakingly reinterpreted using artificial intelligence similar to the traditional animation process of rotoscoping. This process balances the intentions of the filmmaker with the transformative power of machine learning algorithms.

Written in the style of a traditional gothic horror poem, Pearl Dog tells the story of an unnamed narrator recounting his pursuit of a dog that appears mysteriously one night on the beach. Actor Conor Charlton lends his voice to the role, as the narration and animation form a juxtaposition of old and new, resulting in a strange, haunting and dreamlike work.

You can watch the first public screening of Pearl Dog at Repton Filmfest’22, a three-day event held at the prestigious Repton School. To see the full Repton Filmfest programme of events and to book tickets, head to the official website: