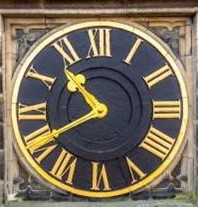 A Derbyshire company has helped a county town landmark church celebrate its 200th birthday – in a truly “timely” fashion.

Lubrizol, a chemistry company whose UK headquarters is based at Hazelwood, near Belper, has got behind an appeal from St Peter’s Church in Belper ahead of its 200th birthday celebrations in October this year.

As part of a wider renovations scheme, St Peter’s appealed to local businesses to “spare a minute”, asking for donations of four pounds to pay for the minutes on its clock to be repainted in gold.

Because the clock on the church tower has four faces, each Roman numeral minute is having to be painted four times. Lubrizol has given a donation that will pay for 25 minutes to be given a smart new gold lick of paint, to help St Peter’s look its best for its 200th birthday party in October.

St Peter’s church warden David Skelton said: “The church stands out above everything else. Anywhere you go in Belper, you can look up and see the church’s clock. We’re so grateful to all businesses which have supported our appeal.”

The foundation stone for St Peter’s Church in Belper was laid in October 1822 by the Duke of Devonshire and this year’s anniversary celebrations are due to be held in the church on October 30.

David said: “We’re very, very excited, it will be a very big celebration – one of the biggest we’ve ever done.”

St Peter’s was built in the aftermath of the Battle of Waterloo in 1815, when funding was made available for more churches to be built.Wider renovation works have involved replacing the church’s tower roof with a wooden one, because the concrete structure put in place after a fire was causing problems with splitting beams and water coming through, upgrading the tower sound and wind controls and keeping pigeons out, plus replacing electric spotlights with more eco-friendly ones. Work to the roof has now been done and the repainting of the clock is the final element to be completed.

Gareth Hickinbotham, from Lubrizol’s charities and communities committee which responded to the appeal for funding for the church clock, said: “We were very happy to “give a minute” or two to help with this very worthwhile project.

“Belper is near our offices in Hazelwood and many members of staff at Lubrizol know the town well, and how important the church clock is to the community. We like to support local projects and are delighted to have been able to contribute to put a new gold gleam on to St Peter’s which will hopefully last for years to come.”