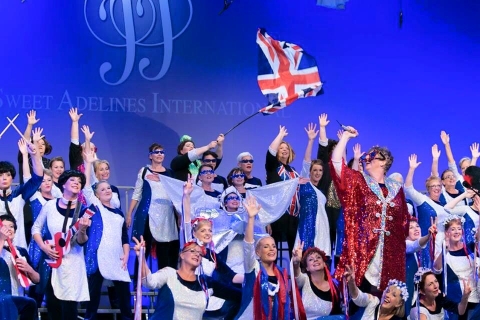 Derbyshire women’s chorus DaleDiva has brought home a silver medal after wowing the judges with its 15-minute show package in the World Championships in Las Vegas.

The Divas rocked the MGM Grand stage with their performance in the Harmony Classic competition and were awarded a score of 1,249 – just ONE point behind the gold medal winners.

DaleDiva, formed by musical director Ally Law in 2007, was selected for the World Championships after winning at national competition level in May last year.

Ally said: “Even to have earned a place in the World Championships was an amazing achievement so to win a silver medal in our debut international competition just one point behind the winners was incredible.

“It’s been 18 months of hard work and dedication leading up to this event and it’s been such an adventure. I’m bursting with pride at our achievement and it will take us all a few weeks to come back down to earth.

“We hope we’ve made our county and our country proud by representing them among the best in the world.”

DaleDiva performed four songs in its show package – its versions of Adele’s pop hit ‘Rolling in the Deep’ and the barbershop ballad ‘If I Had My Way’. This was followed with ‘The British Medley’, a unique arrangement by Diva coach Zac Booles of hits by UK artists including The Beatles, Queen, Elton John and The Spice Girls and ended with ‘The Parting Glass’ – a poignant Irish blessing arranged by Diva Shelley Gray.

Ally added: “The chorus competed against stiff competition from the USA and want to say huge congratulations to the winners and all the competitors – it was a privilege to share that amazing stage with them.

“We also want to say a huge thank you to all our fans, families, friends, local residents and businesses for supporting us in the vital task of raising funds for the trip as well as supporting us through all the many preparations taking part in a World Championships requires. It was a fantastic team effort and we couldn’t have done it without them.”

The chorus raised £29,000 with its ‘Going for Gold’ fund-raising campaign since winning the national competition 18 months ago to make sure as many of the Divas as possible could attend the World Championships.

For more information about DaleDiva and to see its silver medal-winning performance visit www.facebook.com/dalediva and www.dalediva.com