Derbyshire choir hits all the right notes with charity CD 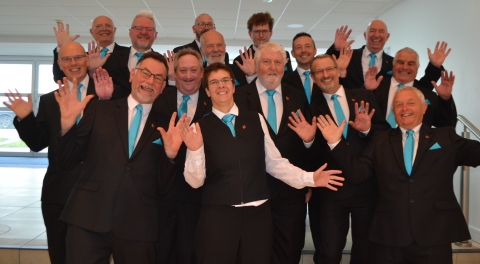 A Derbyshire choir has produced a CD dedicated to people who died during the Covid-19 pandemic and proceeds from the sale will be donated to a charity supporting patients and key workers.

Members of Derbyshire Community Male Voice Choir recorded the CD in February, with tracks including You Raise Me Up, Lean on Me and Hallelujah.
When the coronavirus pandemic took hold just weeks later the choir decided to dedicate the collection to the victims of the virus. And profits from the CD, which they have called A Time for Heroes, will be given to Derby and Burton Hospitals Charity. The CD has been funded by a £500 donation from Lubrizol, based in Hazelwood, and the firm’s graphic design team also offered to design the artwork for the cover.

Chairman Kevin Griffiths has been a member of the choir for 10 years. He said: “We recorded the music for the CD back in February, but post-production was very much affected by lockdown and the new social distancing rules that subsequently came into force.

“It wasn’t finished until May and by then we were very much aware of the heroic work being carried out by the workers in our health and care industry and many other sectors too.

“The horrible number of deaths, among key workers, led us to dedicate the album to those who lost their lives to this terrible virus, and it made sense for sales to go towards a charity that supports them.

“We normally sell our CDs at our concerts, but unfortunately these have all been cancelled. We can’t even meet to rehearse, although those of us with the technology have been catching up via Zoom but it’s not the same.”

There are 30 members of Derbyshire Community Male Voice Choir, with an average age of 65 years old, who normally meet to rehearse in Little Eaton Church Hall.
The choir has been singing and raising money for charity since 1956 when they were known as Derby Police Choir and A Time for Heroes is the sixth CD the group has produced.

Mr Griffiths added: “The CD is a perfect Christmas present and is not just a great stocking filler but also gives something back to the people who have worked so hard during 2020 – so it’s a win-win.

“We’d particularly like to thank Lubrizol for not only supporting us with a donation but for also designing our CD cover, which is very professional and will hopefully help us with sales.”

The CD, which was recorded in St Nicholas’ Church, in Allestree, costs £8 and £6 of this will be donated to the charity. It can be purchased via the choir’s website www.dcmvchoir.com.