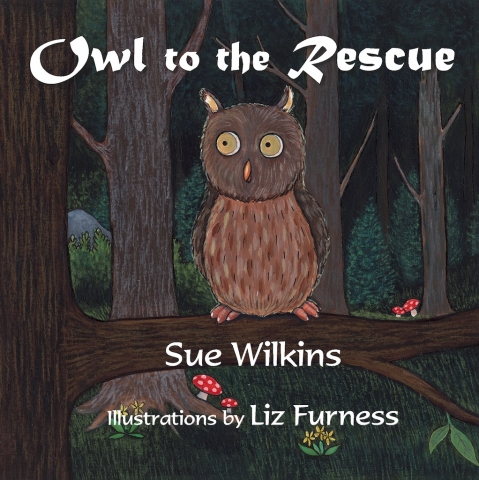 SUE WILKINS, a Derbyshire author of four delightfully illustrated children’s story books, and total sales of 12,500 books, has just released her fifth title.  “Owl to the Rescue” will be available soon at various outlets, including several National Trust properties across the east Midlands region. Forest Garden Centre, in Two Dales near Matlock, will host a formal launch and book signing on Thursday 7 November, from 10.30am till 2.30pm.  Forest Garden Centre was the very first retail outlet to stock Sue’s first book back in 2014, and it has now sold more than 320 copies of all her books – an average of more than one book every week for the last five years.

“Owl to the Rescue” is a woodland story.  Owl is the hero and he works with his friend otter to come to the aid of other woodland animals.  Sue comments: “I’m delighted to be working with Liz Furness again, another Derbyshire lass, who illustrated my first three books.  Liz’s beautifully detailed pictures really bring my story to life.  And this time she has added a quiz page to encourage young readers to identify each of the woodland animals she has lovingly painted.”  Liz said: “I’ve always enjoyed illustrating Sue’s imaginative stories, but this last one has been my favourite. Owl, otter and duck were fun to paint, and I also had the chance to add dragon flies, squirrels, deer and herons amongst others.”

With the amount of wildlife featured in the book, it wasn’t a complete surprise for Sue when the Wildlife Trust (Cheshire) recently placed a large order for the books, after meeting Sue at a craft fair they were both attending.

This has already been quite a year for Sue.  In April, she was invited to attend the British Craft Trade Fair (BCTF), a 3-day event held in Harrogate.  BCTF is the largest and most well-established event of its kind, focusing exclusively on British made artisan products.  Sue secured additional outlets around the country for her books and character soft toys.  Research from organisations including Which? shows that the consumer appetite for authentic British-made products is at an all-time high.

Speaking about life as a self-published author and what the future holds, Sue said:

“It is now five years since I published my first book about "Alfie”, a true story about a stray who appeared in my garden. "Fearless Flynn”, about a daring mouse, followed soon after.  In 2016, I was commissioned by the Arkwright Society at Cromford Mill to write  "Arkwright the Duck" , an adventure for the Mill’s mascot.  In 2017, there was another true story – "Milly, Molly and Maisy", three kittens that I had adopted.  I have often been overwhelmed by the positive comments my books have received, from children, their parents and their grandparents.  And I have been staggered to discover they have been sent all over the world – to France, Germany, Italy, Austria, the USA, Argentina, South Africa and Australia.

“From the beginning, I have been wonderfully supported by many local retailers and I want to acknowledge my debt to them here.  Without their backing and interest, I would have really struggled as a self-published author and would not be where I am now, with sales of over 12,500 books.  Forest Garden Centre in Two Dales was the first outlet to stock my books. On my way home with the first 1500 copies in my car, I popped in to my local garden centre and was delighted that Lindsay agreed to take 20 copies there and then.  This gave me great confidence.  Other local retailers, too numerous to mention here, within a 30-mile radius of my home near Matlock have stocked my books.  Then, earlier this year, I was delighted when the National Trust accepted me as one of their approved suppliers.”

One question Sue is often asked is which story is her favourite.  Her reply: “It’s a difficult one that.  But both Liz and I really do love Owl, the hero of my latest book.”

The opening of Sue’s story sets the scene:

“Deep in a dark and ancient wood
A spreading oak tree proudly stood.

Where woodland animals are safe and warm.”

To accompany this (and all her books), Sue has had unique character soft toys designed and made by a company also based in Derbyshire – Emblem Print Products Ltd from Derby.  Paul Strange, Emblem’s managing director, said: “It’s been a really interesting challenge for us to design and make Sue and Liz’s owl.  He’s a courageous bird and I’m sure children will enjoy cuddling him whilst listening to his story.”

Sue’s first book, “Alfie’s Story”, is a touching true tale of a stray cat who appeared in the author’s garden, whom she eventually adopted.  Since first publishing “Alfie’s Story” in 2014, Sue has sold over 12,000 books, solely through her own efforts.

Sue is a self-published author, which means that all the marketing and promotion is down to her.  Having secured an illustrator for Alfie, she worked with Tom Blyth of Bannister Publications in Chesterfield to bring her first book into the world in 2014. Since then, a new title has arrived each year.  “Fearless Flynn” came out in 2015 and is about a courageous, self-confident mouse who stands on his own four feet and dares to be different from the other mice.

As a result of the success of these first two books, Sue was commissioned to write her third book.  The Arkwright Society at Cromford Mill near Matlock in Derbyshire asked her to write a story for their duck mascot, Arkwright, named after Sir Richard Arkwright who built the mill in the 18th century.  The 32-page story of this intrepid little bird, “Arkwright the Duck”, was released in 2016.

“Milly, Molly and Maisy – a Tale of Three Kittens” is a charming true story about three sisters, whom the author adopted from a local animal welfare sanctuary - The Ark in Ashbourne, Derbyshire.  The theme of fostering or adoption is not often found in children’s books, so it is pleasing to find that two of Sue’s books are about animals she has adopted.  With her first and fourth books both about adoption, Sue was very excited and touched when NurtureUK agreed to promote her books.  NurtureUK works with adopting families and their children.  They particularly like Sue’s books because they enable young children to discuss issues to do with adoption from a pet, and therefore safe, perspective.

Sue writes in rhyming couplets, which makes her stories very memorable for little ones and a real joy for parents and grandparents to read.  For years, Sue had written short doggerel verses for friends and colleagues at significant birthdays or on retirement.  These had always gone down well and eventually a friend suggested she turn her hand to writing stories.  “Alfie’s story was one I knew well,” said Sue, “and that’s how it all started.”

Each title is produced to a very high quality, with beautiful, glossy, wipe-clean covers (ideal after sticky fingers have been involved!) and robust, child-proof bindings.  The illustrations are a dream: bold and colourful with just the right amount of childlike humour.

With “Owl to the Rescue”, Sue now has five books to her name. Like her other books, this is a full-length children’s story over 32 pages.  They are all suitable for children from birth to 7 years of age.  Each book is priced at £6.99.

Sue goes into primary schools to read her stories and to answer questions about being an author.  One highlight of these visits was, on a particular occasion, when she’d finished reading one of her stories, a 7-year-old girl on the front row commented: “Oh, well written!”  As Sue says, you have to take the plaudits when they are offered!

As well as her visits to schools, Sue also gives talks to groups such as the WI and other community associations.