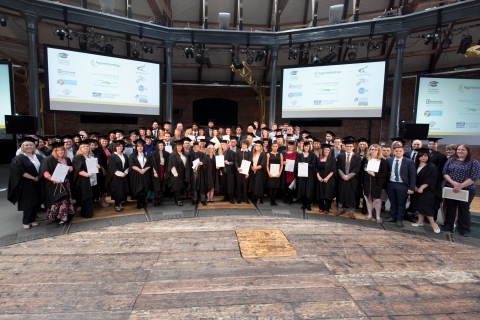 More than 120 former apprentices attended the first ever Derbyshire apprenticeship graduation event at the Roundhouse in Derby on Thursday.

The event was part of a national programme of Apprenticeship graduation ceremonies held to celebrate the achievement of Higher and Advanced apprentices and to raise the profile of Apprenticeships as on an equal footing with a university degree.

The local event was delivered by a consortium after Government funding was awarded to Derby College - one of 19 successful Apprenticeship providers in the country to successfully bid for a grant to plan and host a ceremony.

Guest speakers at the event were Chairman of the D2N2 Local Enterprise Board Peter Richardson and David Hughes who is Head of the Leiter Engineering Academy at E.ON and Chairman of the East Midlands’ Apprenticeship Ambassador Network.

Michael Nichol, Head of Employer and Delivery Services at the Skills Funding Agency, presented a special award to Graham Schuhmacher MBE, former Head of Learning Services at Rolls-Royce plc in Derby in recognition of his contribution to apprenticeships.

The commitment to apprenticeships by local companies and organisations was also featured in the ceremony including Derby Homes, Silver Pride, Grape Vine and the National Grid.

Mr Richardson told the audience: The apprenticeship you’ve just completed will give you a sound footing, for you to deal with what happens next.

“Global companies operating in this county, such as Rolls-Royce and Toyota, spend a lot of time and money running apprenticeship programmes. They see it as a cost-effective way of getting the best people, to run their business in the most efficient and profitable manner.”

David Hughes added: “Undertaking a Higher or Advanced apprenticeship enables employees to progress from competence to excellence and are a key solution to our future skilled workforce.”

The graduation ceremonies project is being rolled out nationally following two pilot ceremonies and four trailblazers over the last two years. Nearly £400,000 of Government funding has been awarded to the project in total.

The graduation ceremony grants have been managed by the Association of Colleges and Association of Employment and Learning Providers, through the Skills Funding Agency. Grant amounts account for around 60% of total event costs with the remainder made up of sponsorship and local area funding.