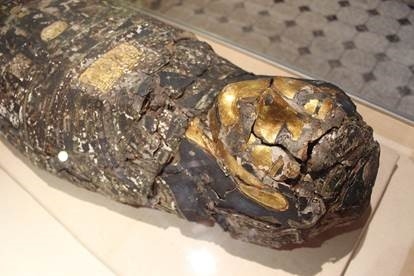 Derby Museums’ ancient Egyptian mummies will make an intrepid visit to Manchester at the end of May for a state-of-the-art radiographic investigation, conducted by researchers at the University of Manchester.

The two human mummies, one of which has been identified as Pypy-Iw – a priest from the 26th Dynasty of Ancient Egypt (664–525 BC) – will travel to Royal Manchester Children’s Hospital, part of the Manchester University NHS Foundation Trust (MFT), to be photographed, CT-scanned and digitally X-rayed to provide a comprehensive insight into the mummified remains.

The mummies have only left Derby Museum and Art Gallery once in the last 140 years, when they visited Lincoln University in the early 1990s for cleaning, stabilisation and X-raying. It is hoped that modern imaging techniques, including CT-scanning, will reveal more about the mummies’ provenance and condition to help with future conservation efforts and deepen our understanding.

Dr. Lidija McKnight, Research Associate for the University of Manchester, will oversee the imaging procedure at the Royal Manchester Children’s Hospital. She commented:

“Although these two mummies were X-rayed many years ago, the clarity and resolution of the images is relatively poor, enabling little more than a basic assessment to be made. Imaging technology is so advanced nowadays, that even those mummies studied as recently as 5-10 years ago, can benefit from repeated study.”

A re-examination of the hieroglyphic texts on the coffin and mummy wrappings will be undertaken by Dr. Campbell Price, Curator of Egypt and Sudan at Manchester Museum, to assess whether any personal details of the individuals are recorded. The team will include Dr. Iwona Kozieradzka-Ogunmakin, an Osteologist who specialises in the study of bones and mummified human remains from Egypt and Sudan. Combining the epigraphy and osteology of the mummies will provide a comprehensive insight into the lives and deaths of these two individuals.

There is a possibility that Derby Museums’ mummy Pypy-Iw once belonged to Joseph Strutt, Mayor of Derby (1765–1844), however it is perhaps more likely that the two mummies in Derby were bought by the Town and County Museum in 1859 for £27.

“We are delighted to work with the University of Manchester and the Manchester University NHS Foundation Trust (MFT) on this project, which will give us a much clearer insight into the two mummies in our collection. The findings of this important research may reveal more about who the mummies were and will help us to understand their ongoing conservation needs, ensuring they are cared for properly so that future generations can continue to learn from and enjoy visiting them at Derby Museums.”

The mummies will leave the Museum for scanning on 20th May, and should be back on display in their full glory at the end of the month, just in time for the start of May half term.