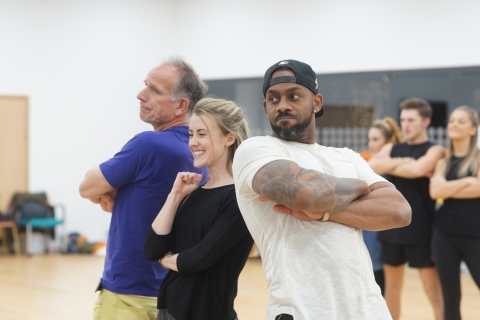 Derby LIVE is pleased to offer relaxed, BSL sign interpreted, BSL shadow interpreted, captioned and audio described performances of the all-star family pantomime Cinderella at Derby Arena as well as Captain Sprout and the Christmas Pirates at the Guildhall Theatre.

Christmas pantomimes and theatre productions are something that many look forward to during the festive season and Derby LIVE believes that it is important to help make their programme accessible to a wide audience. That’s why this season Derby LIVE is offering a range of access performances of Cinderella and Captain Sprout and The Christmas Pirates aimed at catering for various needs.

Cinderella, Derby’s biggest ball and all-star cast pantomime will be staged at Derby Arena. TV star, West End actor and comedian Richard Blackwood and star of the massively popular Mrs Brown’s Boys, Eilish O’Carroll along with Art Attack presenter Lloyd Warbey will guarantee a pantomime experience like no other.

A trip to the Pantomime is sure to get families into the Christmas spirit. Stepping into Derby Arena, which has been transformed into a magical theatre space, with special pyrotechnics and effects, is sure to amaze. Dazzling new sets and costumes, fabulous music and dance routines, hilarious comedy and audience participation. This is the rags to riches tale for whole family.

Cinderella is the classic fairy tale of a beautiful girl forced to serve her jealous stepsisters. Aided by the silly but loveable Buttons (Richard Blackwood) and a Fairy Godmammy (Eilish O’Carroll) carefully watching
over her, Cinderella dreams of escaping her misery and finding true love and happiness. Pantomime goers will join her journey to escape the misery of her dastardly diva sisters and to find true love in the arms of a dashing Prince.

Captain Sprout and the Christmas Pirates is a cracking festive adventure at the Guildhall Theatre for families to enjoy. It’s the night before Christmas and Freddie and Mr Roo are settling down for bed, having set a trap to catch Father Christmas. Little do they know that they will be catching something very different and before long be on an adventure across the high seas to save Christmas for the people of Derby. On a chilly Christmas Eve the naughty pirate Captain Sprout plots a stinking plan to steal Christmas for himself. Armed with his band of cut-throat pirates and a magic treasure map, that rotter Captain is scheming to rob the good children of Derby of their Christmas stockings whilst they sleep in their beds! Only, Captain Sprout didn’t plan for a plucky nine year old boy called Freddie! Armed with just his teddy - Mr Roo and enough Christmas spirit to sink a galleon, Freddie dives feet first into an amazing adventure to stop Captain Sprout and save Christmas, but can he do it in time? Larger-than-life characters, amazing adventures, and a sprinkling of beardy mermaid combine to tell a Christmas tale of trickery, magic, and naughty pirates.

Relaxed performances offer an enjoyable environment for all, including children, young people and adults with disabilities. The productions are adapted in various ways such as altered sound and lighting effects to make the show more accessible. During the performance there will never be a full black out in the auditorium. There is also a quiet area outside the auditorium which can be used if audience members want to leave the auditorium at any point, where they can relax before they are ready to return to the show. During a relaxed performance everyone is encouraged to enjoy the show and express their appreciation and there is a relaxed attitude to noise and movement.

The Captain Sprout and the Christmas Pirates relaxed performance will take place at 2:30pm, Sun 11 Dec.

Ideal for blind and partially-sighted people, audio description is a form of audio-visual translation, using the natural pauses in dialogue or between critical sound elements to insert narrative that translates the visual image into a sense form.

Free touch tours take place 75 minutes before the performance, with the chance to get up close to the set and costumes and often with a chance to meet some of the actors. Customers should let Box Office know if they wish to attend the touch tour. Tickets are free, but should be booked in advance.

British Sign Language (BSL) interpreted performances feature a signer at the side of the stage who signs the dialogue from the performance. It is suggested that customers let the Box Office know when
booking where they would like to sit: directly in front of the interpreter or on the opposite side, looking across the stage. BSL interpreted performances of Cinderella will take place at 10:15am, Thu 8 Dec, 7:30pm, Sat 10 Dec, 6:30pm, Tue 27 Dec and 2pm, Mon 2 Jan.

During captioned performances words appear on screens either side of the stage at the same time as they are spoken - ideal for those who are deaf, hard of hearing or if you'd just like to read along.