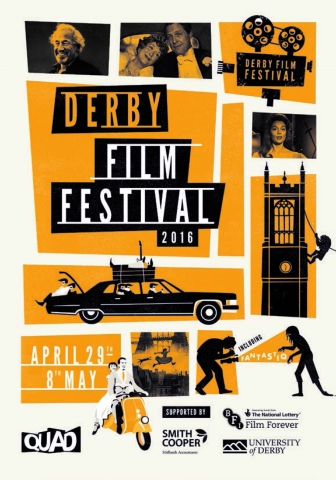 Derby Film Festival returns on April 29th for ten days of film previews, guest events, retrospective screenings and more. Our festival guest of honour this year is actor and writer Simon Callow who will be joining us on May 4th for an on stage discussion of his career in cinema.

Film previews at this year’s festival include Meryl Streep in comedy drama Florence Foster Jenkins, Patrick Stewart in the thriller Green Room, Oscar nominated Turkish drama Mustang and Manchester music documentary Do You Own The Dancefloor?

Other events at this year’s festival include a screening of the 1923 classic The Hunchback of Notre Dame at Derby Cathedral with live musical accompaniment on the cathedral organ, and a screening of the classic romantic comedy Roman Holiday at Derby Museums, in partnership with their Joseph Wright and The Lure Of Italy exhibition.

The second weekend of Derby Film Festival hosts Fantastiq, the festival of sci-fi, fantasy and horror, bringing you the best in genre cinema.

The full festival line up can be viewed and tickets can be booked at http://www.derbyfilmfestival.co.uk.

Group discounts are available for many of the events at the festival. Please email peterm@derbyquad.co.uk to discuss this further.