Derby Dad Launches Derventio’s Charity Appeal After It Helped Him Get Back On His Feet, With £49.98 Boots 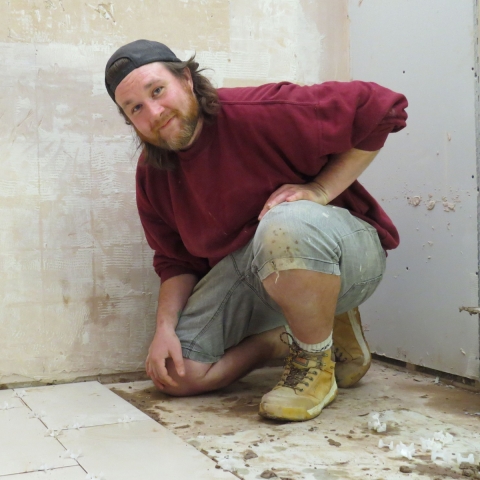 A Derby dad who has been helped back on his feet by a charitable fund which bought him a pair of steel-capped boots is urging businesses and individuals to lend their support so others can also benefit.

Gary Turnbull, a 32-year-old dad from Derby, is one of more than 130 people to have been helped this year by Sylvester’s Fund, a charitable pot of money managed by Derventio Housing Trust, based in Boyer Street.

Named after Sylvester Cichowski, a former Derventio resident who left £4,200 to the organisation in his will, the fund gives practical support to those who have had to access Derventio’s services, paying for a wide range of things including training courses, laptops and white goods to help furnish a new flat.

Diagnosed with ADHD, dyslexia and autism, Gary had been referred to Derventio’s services having been made redundant. For a time unable afford to feed his family, he managed to turn things around with the help of various organisations including Derventio, and has found his ideal job as a tiler.

But in order to take part in the qualification course, he needed a pair of steel-capped boots which he could not manage to pay for himself. Gary was bought the boots costing £49.98 through Sylvester’s Fund.

Gary said: “The last couple of years have been quite a journey for me. If I could rewind two years ago now, I was sitting in my garage crying my eyes out because I couldn’t afford to feed my family and my relationship had broken down. With hindsight, I wish I could lean over and say to myself: ‘You’ve got this. Don’t worry.’ But I was utterly alone.”

Gary was accessing help through organisations including Derventio and the YMCA, and one day a glimmer of hope arrived when he was helping a friend out who was fitting bathrooms.

He said: “I had my first go at tiling and the customer did not notice. I thought, ‘I might be really good at this!’”

For Gary, tiling is an ideal job because it means working for himself and also provides a therapeutic activity for his mind.

He said: “I have had more jobs than hot dinners – it’s a classic story of someone with ADHD! I’ve always been someone who wanted to earn my way through life and take responsibility for my own actions.

“I’m well into my year’s course in tiling now. I absolutely love it. I wish I could do it five days a week. It’s therapeutic. With tiling, you have to be a few steps ahead of where your hands are. You could put the first tile wherever you like but where the last tile goes, there might not be the right place for it. With ADHD, the way my brain functions, my brain runs three or four steps ahead of where my mouth is. For me to tile is to microprocess. It’s hands-on. I am creating my livelihood with my hands.”

Gary said he would love to see many more people given the same start as he was, through donations to Sylvester’s Fund.

He said: “There are so many out there needing the opportunity to make it. The cost of the boots is irrespective of the value it creates in the long term. I don’t think anyone thinks any donation or contribution is too small. There’s not enough support out there. For a young man, the ability to get the support from any business to get people on their feet and learning a trade or skills of any form is beneficial to the whole country.

“I think it’s paramount that businesses see that charity is helping others, it’s really important. It has been a long journey. It has been stressful. I have got the rest of my life stretching out ahead of me. I have the ability to be successful in my own right. Two years ago I saw myself in a hole I was never going to get out of, not living, just existing. Now I’m at the top of that hole, looking down, and I’m so grateful I’m not there anymore.”

Other donations made through Sylvester’s Fund in 2022 include payments for educational courses to help people get back into work; a pair of black trainers for a new job-starter who lacked appropriate footwear; an oven for someone who lost his job in lockdown, and the cost of childcare sessions for someone who needed temporary help looking after her children after securing employment. It paid for a reader pen to help someone with severe dyslexia who needed help studying level 2 English and Maths, as well as birth certificates, mobile phones and many other items, all to help people get back on their feet and move forward with their life.

Derventio has now launched its Sylvester’s Fund appeal in time for Christmas 2022. To donate, visit: www.localgiving.org/charity/derventio/project/sylvesters_fund/