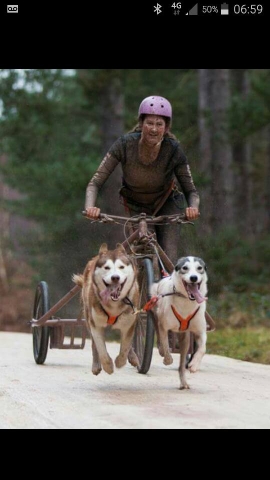 Shauna Leigh Ward (16) from Eastwood will compete in the junior section of the event – racing with a team of four Siberian Huskies against competitors from across the world.

She competes under the title known as Team Quileute named after the family’s raw dog food business.

She and dad Ian are travelling to Poland in the van this week and Shauna Leigh will race twice to vie for the world title with her team of Huskies - Denali (2), Kaiowa (3) and Quill (6) and Gravil (6).

Shauna Leigh’s achievement in reaching the ultimate international event is even more incredible considering that Shauna Leigh was born with a ventricular septal defect (hole in the heart).

In October 2013 she had open heart surgery to close the hole and remove some tissue that was restricting the blood flow. Although the operation was a success she still have a leaking heart valve which makes her breathless and extremely tired.

The family got their first Siberian Husky in 2010 as a pet but now have seven dogs – four of whom race and the others who are family pets.

Shauna Leigh struggled to give the dogs enough exercise due to her heart condition and started ‘mushing’ – pulling her on a sled – which is what the dogs are bred to do.

Shauna said: “The dogs love working and training.  It gives them the exercise and stimulation that they need and means that they burn up the energy they have in a constructive way rather than wrecking the house!

“I entered my first race just six weeks after the open heart surgery and have been doing really well ever since.

“I couldn’t believe it when I qualified earlier this year for the world championships in Poland.

“We have been training hard and I am pretty confident that I will do well over the four mile courses.”

Shauna Leigh combines her studies at Derby College with several hours a week sled training as well as gym-based cardio vascular and strength work to prepare for races.

“It takes a lot of physical strength, endurance and concentration as the courses are over some quite difficult woodland terrain and you have to combine control with adapting to the conditions and surroundings.”

Shauna Leigh plans to continue sledge racing as a hobby in future years – building up the distances – and is still open-minded about her future career in animal care.

“I could try and make my career out of this but I think I will continue to do it as a hobby – albeit it at a high competition level.”