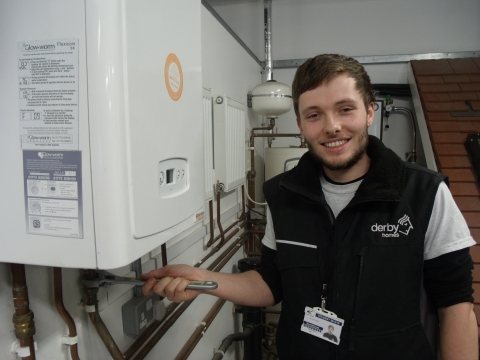 Tom Smith (20) is a Plumbing apprentice with Derby Homes and is studying his Level two qualifications at Derby College’s Roundhouse campus.

He will take part in one of six regional heats in February 2016 at Stephenson College in Coalville for a place in the national finals of the UK Heating Apprentice of the Year competition which will be held in April.

The competition is organised every year by HIP Magazine with the winner receiving a £5,000 prize.

Tom, from Giltbrook is a former pupil at Hall Park Academy in Eastwood.  He started his two year apprenticeship with Derby Homes last September and works as part of the gas installation team.  He is hoping to progress onto the level three apprenticeship with the company next year.

“I am working hard to prepare for the competition which will include fitting a radiator, a cleaning system and a central heating pump with a time limit of six hours.

“These are all skills which I have done at College and at work so I am pleased with the tasks that will be set in the competition.

“It is good to have something to work towards and test my skills alongside other apprentices.”

Tom was nominated for the competition by Derby College Plumbing lecturer David Cooke who said:  “We have some exceptional apprentice learners at the College and Tom is in the top league so we are confident that he will do well in the competition.”

Derby Homes Apprentice Development Manager Sophie Bancroft concluded: “Tom is a well-liked member of the Derby Homes team. He gets on great with his colleagues and is always eager to learn.  He is an asset to our organisation and we are immensely proud that he has been entered into this competition.”