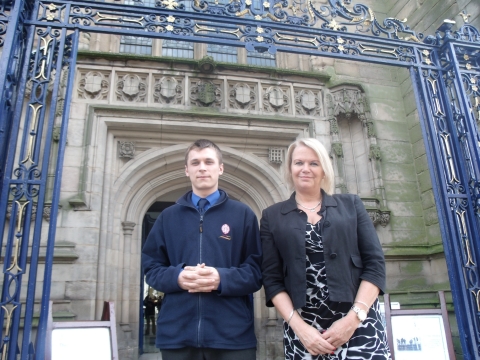 Derby Cathedral has launched its search for a second apprentice verger following the resounding success of its first appointment.

Joseph, a former pupil at Friesland School in Sandiacre, gave up his job in a recycling centre to start the apprenticeship.  Alongside earning a wage, he has completed customer service qualifications with Derby College and will now go onto study for the Church of England Guild of Vergers diploma.

His role at the Cathedral has included welcoming thousands of visitors to the Cathedral, supporting with the security and upkeep of the building, setting up and taking part in services and events including operating PA and lighting equipment as well as leading the procession of clergy at key services. During his apprenticeship, the Cathedral has undergone major refurbishments and has hosted a wide range of commemorative and celebratory events and services with visitors including the Archbishop of Canterbury and Saudi Arabian royalty.

Joseph said: “My key role is to ensure that everything runs smoothly at the Cathedral and I am really pleased that I now have a full time role to continue the job. “Every day is different and I particularly enjoy coming into contact with people from all walks of life whether they have come to the night shelter, to a jazz concert or to worship.”

Joseph will be heavily involved in the recruitment process for the new apprentice and is looking forward to being the second youngest person working at the Cathedral. “This is a great opportunity for a young person looking for an apprenticeship and I hope that people won’t be put off by the fact that the Cathedral is our workplace. “I had never really set foot in a church before I came here. It is a great environment to work in and has helped me to grow as a person and develop a far greater consideration of others having seen how everyone works together and to support each other. “The main quality they will need is enthusiasm for the role and to be sympathetic to the Christian ethos.”

Rachel Morris, the Cathedral's chapter steward said: “Joseph has done an outstanding job as our first apprentice verger which is a unique role in the UK. “Having seen how successful the apprenticeship programme is in this vital role at the Cathedral, we are keen to recruit our next young person to follow in his footsteps. “We are looking for someone with an appetite to learn, to remain positive and cheerful even under pressure, be strong team player and have naturally good interpersonal skills. “They also need to be comfortable working with the widest cross section of the public and in a religious environment. “As Joseph has proved, this is a fantastic opportunity for a young person to work in an interesting, diverse and vibrant environment and we look forward to working again with Derby College to recruit into this role. “Derby Cathedral is a fast paced, and exciting place to work. We are open for the whole community 365 days a year and the Apprentice Verger is an important part of the team welcoming one and all to the Cathedral for a wide variety of purposes. “We are fully committed to supporting young people into the workplace and had already worked with apprentices in other areas such as administration and the café where we are also recruiting another young person at the moment.

Derby College Business Development Director April Hayhurst concluded: “We are delighted with the success of this unique apprenticeship programme. “This is a fantastic opportunity for a special person to work at the heart of one the regions’ best known institutions. “It has been definitely one of the more unusual apprenticeship roles that we have worked on but I am confident that we will again be able to find the right candidate for the Cathedral and support the young person onto the first rung of what will be a fascinating career ladder. “The diverse skills and experience that the successful candidate gains will open many doors for them in a wide range of future careers.”