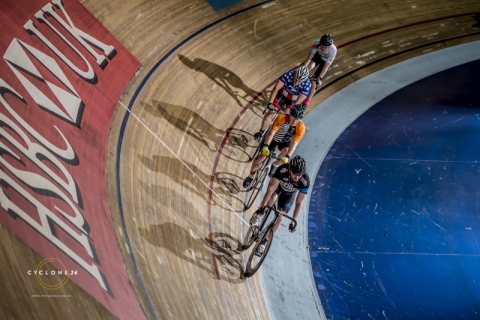 People from across the East Midlands are being invited to jump in the saddle and take on an epic cycling challenge as Cyclone24 comes to Derby Arena.

Now in it’s third year, having previously been held at The HSBC National Cycling Centre and Wales National Velodrome, Cyclone24 remains the UK’s only 24 hour indoor velodrome challenge, whereby riders face the unenviable task of staying awake for 24 hours, battling physical exhaustion and mental fatigue as they take to the track in teams of 6 vying to cover the furthest distance possible in the time allowance.

The challenge is set for February 2018, at Derby Arena, where twenty-four teams of six will descend on the velodrome at midday and 24 hours of non-stop cycling will begin.

Zoe Westerman, Director, Cyclone24 said "Most people’s reaction is that it must be an incredibly hard challenge and only for those who ride the velodrome regularly but the reality is very different. Around 60% of those taking part are new to the track with teams coming from a mixture of local businesses, cycling clubs and gyms.”

And whilst cycling as a team for 24 hours on 42 degree banking, with no brakes on a fixed gear bike is certainly a challenge, Cyclone24 welcomes all abilities to take part as all equipment is included and track induction sessions are available ahead of the event for those who haven’t ridden the track before.

Since starting just two years ago, Cyclone24 has raised more than £65,000 for local charities, and their official charity partner for the event is the Nottingham Children’s Hospital Big Appeal.

Nick Lawson, Fundraising Manager, Nottingham Hospitals Charity, said “We are so excited that the Big Appeal for Nottingham Children’s Hospital has been chosen as the official partner for Cyclone24 Derby. We have seen what a success Cyclone24 has been in Wales and we can’t wait for the event to come to Derby, to cheer on the brave teams of cyclists on their incredible 24 hour mission and to raise vital funds for Nottingham Children’s Hospital”.

The challenge clock starts ticking at midday on Saturday 3rd February 2018, and with some teams already signed up, the organisers are encouraging teams to register their interest early.

*If you think you’re up for the challenge as a corporate team or as a group of colleagues and friends please contact enquiries@cyclone24.co.uk