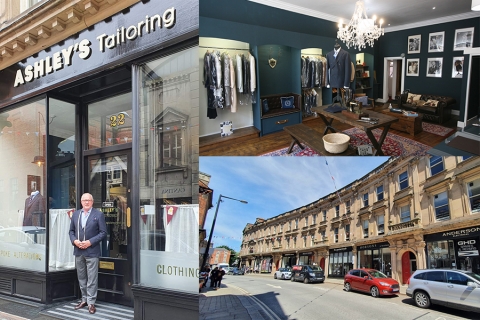 All the business premises in one of Derby Cathedral Quarter’s most iconic streets is now either occupied or under offer, according to commercial property agent Trevor Raybould.

The Strand’s latest occupant is long-established Derby tailor Ashley Buckley who has moved from a first floor studio in Iron Gate into beautifully refurbished street level premises where he continues to offer bespoke men’s tailoring and alterations.

He has also been joined in The Strand by Ruth Day who specialises in wedding dresses, alterations and dress making.

The Strand was built in 1881 in the Neo Classical style by Sir Abraham Woodiwiss - a famous Derby Engineer who also built the Settle to Carlisle Railway Line which, with its many fine viaducts and stations, has become a major national tourist attraction.

He was also Mayor of Derby when Queen Victoria visited the city and he was knighted on the platform of the Derby Railway Station.

Mr Raybould, who secured the letting to Ashley’s Tailoring, said: “The Strand has always been popular with shoppers and essentially offers the diversity of a department store in one street.

“Despite all the challenges of the past 18 months, it is testament to the strength and versatility of Derby’s ‘high street’ offer that all the premises are now occupied or under offer in this iconic part of the Cathedral Quarter.

“Nearby, The Strand Arcade will soon see a new arts and crafts shop opening and footfall will be further strengthened by several major redevelopments planned or underway in the nearby Victoria Street, Wardwick and now, of course, Becketwell which will all have a positive impact on footfall in the coming months and years.”

Ashley Buckley trained and worked in Paris, Milan and Oporto before setting his own business firstly in the Eagle Centre in 1986 and then in The Wardwick and Irongate.

He said: “Having been in in Iron Gate for the past six years, I saw lockdown as a great opportunity to move.

“In The Strand, we have created an open and luxurious showroom and now have the space and surroundings which truly reflect the quality of our bespoke tailoring and alterations service for men and women.

“The street itself is the perfect location with on-street parking or a short walk from Park Safe in Bold Lane.”

Martin Langsdale MBE, chair of the Cathedral Quarter Business Improvement District (BID) Board, concluded: “The Strand is probably one of the most photographed streets in Derby due to its beautiful crescent shape and the quality of the businesses situated there.

“We are delighted that Ashley’s Tailoring has chosen to remain in the Cathedral Quarter for this important move to new, larger premises and wish him and his neighbours continued success as the business community starts to recover from what has been the most challenging 18 months for everyone.”