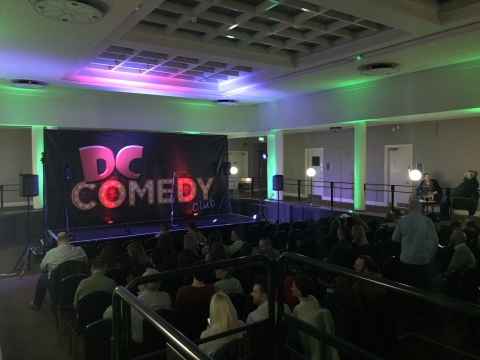 DC Comedy Club are delighted to announce that their sold-out night was a roaring success. The night, which saw the venue host an audience of 260 people, sold out in just under four weeks. The night consisted of four comedians; before the headliner Ricky Grover, the audience were suitably warmed up with Chris Purchase, Gavin Webster and Andy Watson.

Matthew Hutchings, Managing Director of The Derby Conference Centre, said: “It was a brilliant night, the atmosphere was great, and you could really feel the buzz afterwards. It was truly rewarding to see people leaving our venue with big smiles on their faces. We’re really proud to be able to host DC Comedy Club and can’t wait for the next event - we’ve already seen a huge increase in bookings within 24 hours of our opening night!”

DC Comedy Club is returning to The Derby Conference Centre every month and promises to put on a variety of fantastically funny, world class comedians for a night of entertainment. Tickets are already on sale for the next two nights, which fall on Saturday 23rd March and Saturday 27th April 2019.

More information on which comedians will be performing can also be found here.