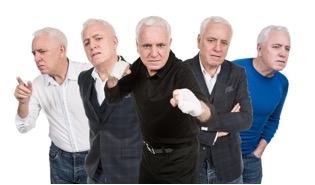 DAVE SPIKEY SET TO DELIVER SOME SERIOUS ‘PUNCHLINES’ DURING HIS AUTUMN 2016 TOUR.

I wish I hadn’t worn mascara’, my companion remarked as she wiped away the tears as Dave Spikey left the stage. Immediately likeable and with spot-on observations, there was certainly one word that came easy for the audience – ENCORE!”
-  Manchester Evening News

Booking Charges will apply at some venues

After starring in and writing comedy drama Magnolia for BBC 1 and Dead Man Weds for ITV1, Dave became a regular on our screens as Team Captain alongside Jimmy Carr and Sean Lock on Channel 4’s hugely popular panel show                   8 Out of 10 Cats.  ”.   Between 2010 and 2012 Dave was a co-presenter on the TV Book Club for More4/Ch4.
And was also selected as presenter for the Challenge TV revival of legendary quiz show Bullseye. He has just filmed another series of Make you Laugh Out Loud for Channel 5.