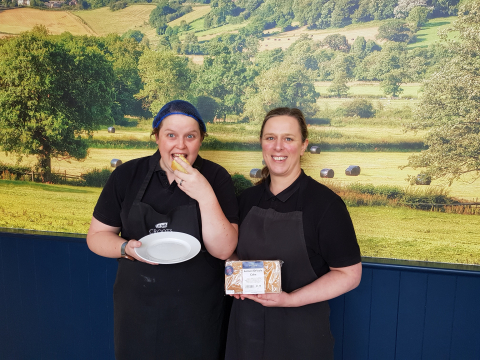 Popular Derbyshire farm shop Croots is celebrating after its lemon drizzle cake was named as the best sweet bake in the Great British Food Awards 2021.

Made on site by the bakery team at Croots Farm Shop near Duffield, the lemon drizzle cake is a big favourite with customers.

Six years ago, Croots took the same top slot in the sweet bakes category of the Great British Food Awards with its Bakewell tart, while the Croots Derbyshire pasty was highly commended in the awards in 2016 – flying the flag for Derbyshire produce.

This latest award comes after Croots won a gold star award for its luxury mince pies in the prestigious Great Taste Awards 2021 and a silver award in the British Pie Awards 2021 for its lamb and mint pie.

Kay Croot, who runs the farm shop, said: “We are thrilled that, for a second time, one of our sweet bakes has been selected as ‘best in class’ for a national award. Both our Croots lemon drizzle cake and our Croots Bakewell tart are made by our team of talented bakers here at Croots and they are very popular with customers.

“We’re delighted to hear that the judge of this award agrees with our customers - that the Croots lemon drizzle cake is worthy of a top accolade.”

The Great British Food Awards were launched in 2014 to celebrate the country's finest artisanal produce, as well as the hard-working people behind the scenes. This year, the awards were bigger and better than ever, with lots of new categories and amazing celebrity judges.

Croots Farm Shop receives a name-check for its award win in the current edition of Great British Food magazine.

Croots, which is based at Farnah House Farm, Wirksworth Road, Duffield, opened in 2008 and has won scores of awards for its products. It specialises in supplying top quality local food and drink, offering products from more than 40 producers within a 50-mile radius, alongside the wide range of products it makes in-house, including sweet and savoury bakery items.

In addition, Croots has a well-stocked butchery, as well as a deli and cheese counter.