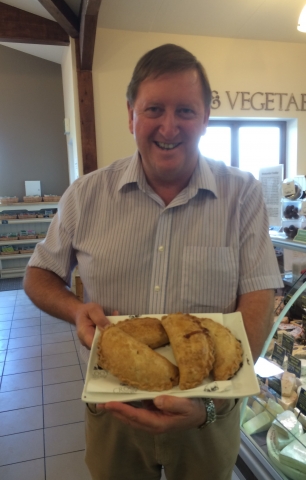 Derbyshire farm shop Croots has scored success with its home-made Derbyshire Pasty after it was highly commended in the 2016 Great British Food Awards.

Croots Derbyshire Pasty, made from local beef, potato, swede and onion, was highly commended in the Savoury Pies and Pastries category of the awards, run by national magazine Great British Food. It’s the second time that the farm shop near Duffield has won an accolade in the magazine’s awards, while flying the flag for Derbyshire food at the same time. Last year, Croots Bakewell Tart was named as the top sweet bake in the same competition.

Steve Croot, who runs the farm shop at Farnah House Farm, Wirksworth Road, with wife Kay, said: “We’re chuffed to have added another accolade to our collection of awards. Croots Derbyshire Pasty is a local twist on the famous Cornish Pasty, but of course is made with local ingredients. “It’s very popular with our customers and we’re delighted to hear that the judges rated the pasty highly too.”

Last month Croots struck gold with its rump steak, winning an accolade in the Great Taste Awards 2016. Overall, the shop has won more than 100 awards for its products. Croots Farm Shop will receive a name-check for its latest commendation in the October issue of Great British Food, on sale September 2nd 2016.

It is open Monday to Saturday from 9am to 5pm (Shires Eatery until 4.30pm) and from 10am to 4pm on Sundays. Croots runs Fresh Fish Thursdays between 9am and 1pm on Thursdays.