Community Lantern Parade Will Shine A Light On City’s Diversity 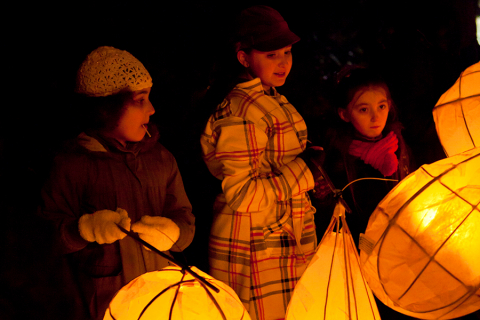 More than 250 school pupils and community group members are expected to join a community lantern parade ahead of Derby’s Christmas lights switch on next Saturday (November 13).

The festival has included workshops, community events and arts performances between October and December – coinciding with major cultural and religious festivals including Eid, Diwali, Bonfire night and Christmas – which all share the common theme of ‘light’.

Through this theme of light, the festival also celebrates the city’s dazzling diversity and cohesion amongst local communities as well as honouring and paying tribute to the ongoing courage and dedication of NHS Staff and all key workers during the pandemic that have connected people through these most challenging of times.

Surtal Arts, working in partnership with Derby Museums, has organised several workshops over the past few weeks.

Led by professional artists and inspired by the climate change agenda, people of all ages have been making willow, clay and pipli (Indian textile) lanterns of all shapes and sizes which will be illuminated by battery-lit LED lights for the parade.

Everyone who has been involved in the workshops will be invited to gather at the Spot (St Peter’s Street, outside Poundland, Derbion) on November 13.

Starting at 4pm, the lantern parade will be led by the Mighty Dhol drummers from Surtal Arts and a spectacular show-stopping lantern sculpture created by artist Stephanie Coley which was commissioned by Surtal Arts especially for the Derby Season of Light festival.

Members of local communities holding colourful lanterns will be followed by characters from this year’s Derby Arena Christmas pantomime ‘Sleeping Beauty’ who will join the parade..

The parade will move down St Peter’s Street and the Cornmarket, through the Market Place and onto the front of the Council House in Corporation Street at around 4.50pm.

Following the lantern parade, the spectacle will continue with a performance of ‘Our City of Making’ on the steps of the Council House in Corporation Street at 5pm.

This cross-cultural dance piece has been commissioned by Junction Arts as part of their regional project ‘Our Place’ showcasing the people and places of the East Midlands through the arts and is a shining example of cross-community work which is key to Derby’s bid to become UK City of Culture 2025.

Performed by Surtal Arts, Naachda Sansaar and Hoverla Dance Ensemble, the dance celebrates Derby as a 'city of making' known for its rich engineering and cultural heritage.

The performance brings together two of the city's oldest diverse communities, Indian and Ukrainian, powered by fusion choreography that explores similarities of their two distinctive folk-dance styles (Bhangra and Cossack) that weaves in and out, creating a colourful, high-energy, all-male fusion dance performance.

Nisha Nath, chair of Surtal Arts which has spearheaded the Derby Season of Light, explained that the family festival aimed to bring together local communities and shine a light on hope for the future.

She said: “Derby is a vibrant home to 182 different cultures and we have reached out to other communities to make Derby Season of Light a wonderful celebration of our city’s diversity through various arts activities, events and performances with the universal theme of ‘light’.

“The lantern parade will be a very visual and inclusive part of the festival and our aim is that it shines a light on how, by coming together, we can create a positive future for everyone in the city.”

For more information about all the Season of Light activities, events and performances, please visit: https://www.surtalarts.co.uk/