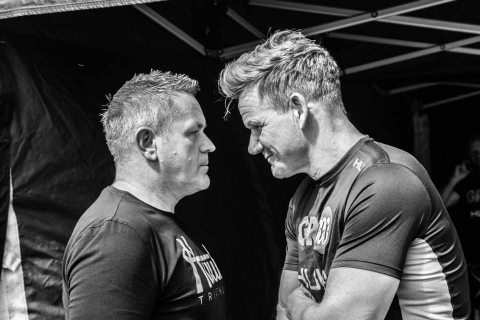 A ‘friendly’ bet between the two will play out on Sunday June 14 when they will tackle the gruelling triathlon course in a bid to cross the line first.

The loser will pay £1,000 into the Gordon Ramsay Foundation which supports UK health charities.

The two will then go head to head again for a re-match at the Jenson Button Trust Triathlon in Derby on Sunday July 12 when Gordon Ramsay will then return to the area – lining up alongside hundreds of novice, amateur and professional athletes including the F1 driver himself.

Ironman 70.3 Staffordshire will consist of a 1.2-mile swim in Chasewater reservoir and a 56-mile bike course through countryside roads around Lichfield, Burton-upon-Trent and Cannock Chase. The concluding 13.1 mile run will start and finish at the historic Shugborough country estate, the former ancestral home of Lord Lichfield.

The first 50 competitors will then qualify for the 2015 Ironman 70.3 World Championship.

Gordon Ramsay is a keen triathlete and wears HUUB wetsuits when he competes across the UK alongside 100 other members of the GR100 – a team of amateur athletes who come together regularly to raise money for the chef’s foundation.

Set up in 2014 by Gordon and Tana Ramsay to make a meaningful difference to charitable causes close to them. The Gordon Ramsay Foundation supports five worthy charities and their causes - Cancer Research UK, Scottish Spina Bifida Association, Louis Dundas Centre for Children's Palliative Care, Action Against Hunger and Meningitis Now.

Dean Jackson said: “A spot of friendly banter has turned into a serious challenge between myself and Gordon.  We have quite similar stubborn personalities and there is a lot of pride and bragging rights at stake here.

“I have been training hard to give me the best possible chance.  It will really depend on which one of us is at the top of our game on the day.

“My one regret is that I organised for Team Raleigh, the Derby-based professional cycling team which HUUB sponsor, to take Gordon’s GR100 team around the cycling route ahead of the event on Sunday as part of their training so I hope they have not given him any particularly useful tips.

“Whatever the result, the re-match will then be at the Jenson Button Trust Triathlon in Markeaton Park on July 12 which I am particularly looking forward to.

Gordon Ramsay added: “I hope that Dean is afraid – very afraid - having taken on this challenge!

“The GR100 team will be entering the Ironman 70.3 Staffordshire event as part of our competition programme across the UK.

“My focus is usually on the rest of the team to ensure that we all do well but I will definitely be watching out for Dean – hopefully behind me – to make sure there are no nasty surprises.

There are still spaces available for individual and team challenge (teams of three) to  to compete alongside Jenson Button, Gordon Ramsay and a host of other athletes at the Jenson Button Trust Triathlon, on Sunday July 12.

The event will include a preliminary heat consisting of a 200m lake swim at Markeaton Park, 10km cycle into Derby’s Cathedral Quarter and then back to the Park for a 2.5km run.

The top performers will go on to the final – competing in a 400m swim, 20km cycle and 5km run.

There is also a team challenge, sponsored by Midlands business advisors and accountants Smith Cooper.  Teams of three people (either all male, all female or mixed) will each tackle one of the triathlon stages and also have the chance to race twice during the day.

To register and for more information, please visit www.jensonbuttontri.com