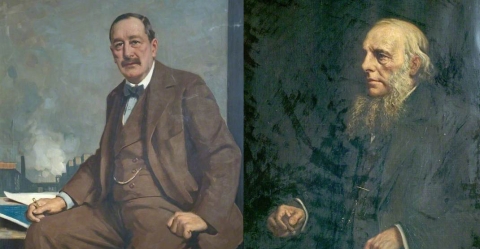 The Markhams were an old Northampton family, chiefly associated with the practice of law, but Charles broke with tradition and, after studying chemistry at Edinburgh University, went on to devote his life to engineering. After a short spell working for the South Eastern Railway he was appointed Assistant Superintendant to the Midland Railway Company at Derby, where he perfected a device to change over the firing of locomotives  from coke to coal. His new design for a fire-box would eventually save the Company some £50,000 each year.

Charles went on to meet and form a partnership with Richard Barrow, the owner of one of the largest collieries in Derbyshire and proprietor of the Staveley Works. Together they turned that concern into the Staveley Coal and Iron Company, opening no fewer than twenty collieries, with a work force of over 4,000 and Charles as Managing Director and Chief Engineer.

Charles married Rosa Paxton, the fifth daughter of Sir Joseph Paxton. They lived at Belper, where their first child, a daughter Geraldine, was born, before moving to Brimington Hall, where four more children were born. In 1873 the Markham family moved to Tapton House, where they were to remain until 1925.

During his time at Staveley Markham was keen to promote the health and welfare of his workforce. The Company provided workers’ cottages, day and evening classes, a library, a church, several chapels, a medical service and annual subscriptions to local schools. He was also a keen supporter of the Chesterfield and North Derbyshire Hospital, which received an annual income from the Company.  His enthusiasm led to the formation of a building society, a horticultural society, evening classes and Staveley Brass Band.

It was said that Charles was, as always, married to his industry and was to remain so until he was forced into retirement by ill-health in 1886.

Charles Paxton Markham was the eldest son of Charles and Rosa Markham. He  grew up at Tapton House, following all the normal pursuits which suited the country gentleman of his day, numbering amongst his favourites, yachting and shooting.  In later years however, he had little or no time for either of these as he devoted his life to his business activities.

On his father’s death in 1888, Charles found himself, aged 23, elected to the board of the Staveley Coal and Iron Company, a position he held for the rest of his life. Under his chairmanship the company expanded enormously, capturing well over a fifth of the British coal winding gear market, extending all branches of the chemical industry and installing the world’s largest gas engines. He was best known as a coal owner, and was always deeply concerned about the welfare of his workforce, including the plight of the pit ponies – he devised a scheme to replace them with mechanical haulage!

Charles married ‘Daisy’ Jackson, daughter of Thomas Jackson, Chairman of Clay Cross Coal and Iron Works. Their first home was at Springbank House, on Ashgate Road. Later they lived at Hasland Hall, then Ringwood Hall. After Rosa Markham’s death in 1912, Charles inherited Tapton House, although Ringwood continued to be the family home.

Charles served on the Chesterfield Corporation for twenty five years. He was mayor on three occasions. In 1911 he turned his attention towards slum clearance in the town centre, providing substantial funds for the regeneration of  the ‘dog kennels’ area – decaying and overcrowded houses and yards to the south of the Market Place. The new scheme included the appropriately named Markham Road.  In recognition of his endeavours he was made an Honorary Freeman of the town. Other initiatives that he financed included open-air swimming baths, hospital wards, a refuge for homeless men and a rest home for former employees (at Holymoorside).

In 1925, a year before he died, Charles Paxton Markham gave his entire 200-acre Tapton estate to the Borough Council. In his letter to the Mayor he wrote:

“...I trust that it may be useful as a Museum or Institute in other ways for the benefit of the inhabitants of Chesterfield.”