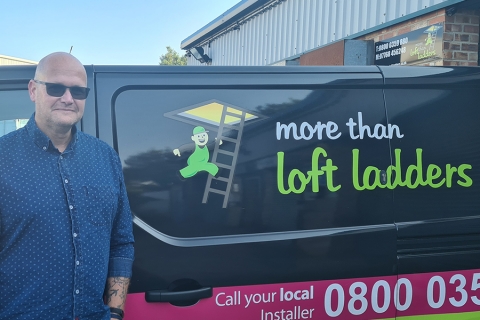 A Long Eaton business has pledged support for The Brain Tumour Charity which is the world’s largest charity dedicated to funding global research into the disease.

More Than Loft Ladders in Meadow Lane is donating £1 for every job it completes this year and is on target to raise £1,200 by the end of 2021.

The charity is close to the business owner Liam Hobbs’ heart as his wife Kelly (41) was diagnosed with a brain tumour in 2015.

Following a successful operation, months of recovery and then years of tests and scans, she was finally given the all-clear by neurosurgeons at Queen’s Medical Centre in March this year.

Liam (45) from Toton had also planned to enter the London Marathon this October to support the charity but has had to abandon training and defer his place due to a strained Achilles tendon.

He said: “The last six years have been a roller coaster of emotions and when we got the all- clear for Kelly, we really wanted to support The Brain Tumour Charity.  They have been an incredible source of information and support as we navigated the journey through the brain tumour treatment.

“Customers have really responded well to our pledge to donate £1 for every job we do this year and I had my heart set on running the London Marathon to raise even more money so I’m gutted that injury has got in the way.

“It will however give me more time to train harder for next year’s event as I have not really done any running since entering the New York Marathon in 2014 on the 10th anniversary of my mum’s death.

“At that time, I wanted to do something to finally deal with losing mum who was just 54 when she died of cancer. It was an opportunity to put the lid on the box of dealing with mum’s premature departure from our lives.

“This time, I wanted to enter the London Marathon to bring closure of everything that Kelly and the family have been through.  Although I will have to wait another year, the training has been a good opportunity to get back into shape and I hope to be back pounding the pavements in a few weeks."

More than Loft Ladders, operates across Nottingham, Derby and Sheffield areas as part of a national franchise network and won a regional award earlier this year in recognition of its excellent customer service and feedback for its work to install hatches, part or full loft boarding insultation, lighting and smoke alarms to transform dark and forgotten lofts into usable space.