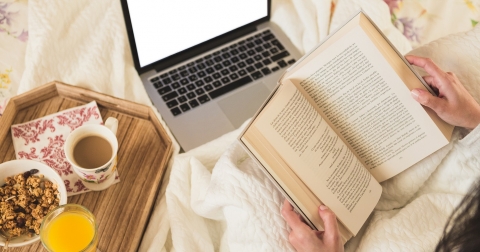 As the Big Book Weekend approaches, Derby is getting a real appetite for reading following a huge rise in the number of people accessing eBooks for free from the city's online library services.

Although the city's libraries remain closed due to the Covid-19 pandemic, members are still able to access eBooks, eMagazines, eAudiobooks and the eReference library. New members can join online and receive a temporary ticket which gives them access to online services too.

Derby Libraries have lots of recommendations for eBooks and eAudiobooks for both adults and children on their website at www.inderby.org.uk/libraries.

For reading groups, a number of titles for members to enjoy at the same time have just been released. These include The Wayward Girls by Amanda Mason, The Tattooist of Auschwitz by Heather Morris, and The Familiars by Stacey Halls, with more titles are being added. Reading groups can access these eBooks from the libraries website using their library card and PIN. If you are not a member you can join online and receive a temporary ticket by going to go to www.inderby.org.uk/libraries/how-to-join.

The Big Book Weekend, from 8th to 11th May, is a virtual book festival bringing together the best of cancelled literary events in Britain. As part of a packed programme for readers of all ages, book lovers in the city will have the chance to watch an online event which was originally planned for the Derby Book Festival. The festival was due to be held in June but has since been postponed due to the Covid-10 pandemic.

A Debut Author event featuring Louise Hare and Beth Morrey will be included in the Big Book Weekend as part of BBC's Culture in Quarantine. Their interviews with Sally Wall have been recorded and will be shown on the MyVLF.com platform at 3pm on Saturday 9th May. To find out more and register for free, go to www.bigbookweekend.com.

Both authors were included in The Observer’s selection of 10 best debut novelists. In Louise Hare's This Lovely City, her central character arrives on the Empire Windrush to post-war London, but soon learns that new arrivals are treated with suspicion. In Saving Missy, Beth Morrey, who hails from Derbyshire, looks at the loneliness of a difficult and prickly woman who finds that there are still second chances - even at 79.

Some other Derby Book Festival events are going ahead in a different format, including the second Derby Children’s Picture Book Award, with the winner recently announced online as Brian the Brave by Paul Stewart and Jane Porter, published by Otter-Barry. The festival’s Flash Fiction competition is also running, with writers invited to write a story on the theme of ‘home’ in a maximum of 50 words. To find out more, visit the Derby Book Festival website at www.derbybookfestival.co.uk.