Call Mr Robeson. A Life with Songs. 13 May in Crich 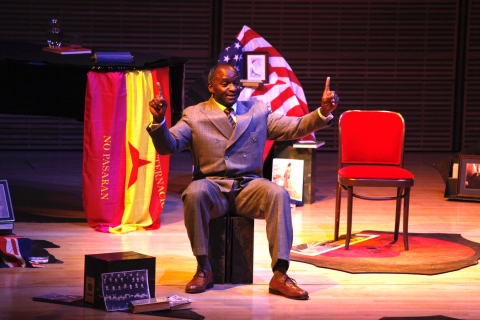 Written and Performed by Tayo Aluko, With Live Piano Accompaniment

“They say I’m meddling in the foreign affairs of the United States Government. Now, that’s too bad, ‘cause I’m going to have to continue to meddle...”

Paul Robeson is a world-famous actor, singer and civil rights campaigner. When, over the years, he gets progressively too radical and outspoken for the establishment's liking, he is branded a traitor to his country, harassed, and denied opportunities to perform or travel. Just as physical, emotional and mental stress threaten to push him over the fine line between genius and madness, he is summoned to appear before the House Un-American Activities Committee, to give the most difficult and important performance of his career.

This roller-coaster journey through Robeson’s remarkable and eventful life highlights how his pioneering and heroic (but largely forgotten) political activism led many to describe him as the forerunner of the civil rights movement.

It features much fiery oratory and some of his famous songs, including a dramatic rendition of Ol’ Man River from Jerome Kern’s “Showboat”.

Tayo Aluko revives one of the 20th Century’s most impressive but overlooked figures in this powerful, compelling tour-de-force award-winning performance, which has been seen all over the world.

Suitable for those aged 12 and over.