Buxton has the best of Friends, says new Patron 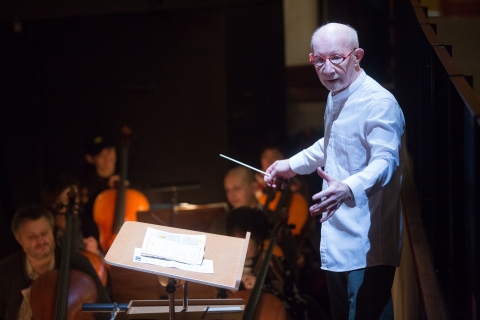 Buxton International Festival has one of the best Friends organisations in the music world, their new Patron Wyn Davies believes.

Wyn, who takes on the role from the Friends’ first patron Donald Maxwell, is an internationally renowned conductor who first appeared at the Buxton Festival in 1983 when he conducted the children’s opera James and the Giant Peach.

His work has taken him from New York to New Zealand, and although there are friends groups supporting music events across the globe, nobody does it like they do in Buxton.

“Very few friends organisations have contributed what Buxton Friends have to their main organisation,” said Wyn, who is Director of Music at New Zealand Opera.

“Maybe we have started to take that for granted a little and I think that we ought to trumpet that a bit more.”

Some friends elsewhere see membership just as a ticket to the dress rehearsals: “There are people around the world who use it for that.  They pay their subscriptions so it means that they can get in early and see the show before anyone else.

“In the case of Buxton, that is a very small part of it. There is generally speaking one entire production which is underwritten by the Friends, which is a massive contribution, so they are very important to the Festival.”

Wyn is impressed by the range and quality of fund-raising events the Buxton Friends create, bringing exciting music to fascinating places including stately homes, museums and an Art Deco cinema.

“I think it is important think to keep up the social element of the Friends group – it is a club after all,” he said.

After graduating from Christ Church, Oxford, Wyn joined the Welsh National Opera as a Staff Conductor in 1974, and has worked at the Metropolitan Opera in New York and the Banff Centre for the Performing Arts in Canada which included the 1989 award-winning production of Weill's Threepenny Opera in Toronto.

In Britain he regularly conducts with the Hallé Orchestra and for Opera North, and of course at Buxton Festival, whose informality has created a unique niche in the UK.

“It’s regarded as the leading ‘un-posh’ festival,” said Wyn. “You don’t have to be a millionaire to get to see a performance at Buxton, but that is no reflection on the quality of what you will see here.”

And it’s not only audiences who head for Buxton: the Festival is putting the next generation of artists on the map, too.

“It has become increasingly important to have on people’s CVs,” said Wyn, “Maybe in the past it was thought of ‘that festival up North’ and there was a time when it was difficult to get the Press to Buxton, but that’s changed because of the quality of recent years. “

Artists starting out on their careers are willing to spend time in Buxton’s chorus because they can have lunchtime recital slots: “It will probably be the most prestigious solo platform they’ve had, so that is particularly important for young singers.”

l Wyn is also famous as a cabaret artist with a highly-acclaimed one-man show of songs and piano music which he is bringing to a Friends fund-raiser at Hassop Hall Hotel near Bakewell on September 12.

And he will take over from his predecessor as Patron, the Scottish baritone Donald Maxwell, in suitably musical style by accompanying him in a farewell show called “Donald’s Final Fling” on October 19 in Buxton’s Pavilion Arts Centre.

Donald is a former Artistic Director of Buxton Festival and has been Director of the National Opera Studio and Head of Opera Studies at the Royal Welsh College of Music and Drama. He regularly sings in concert, on television and radio.

For more details of Buxton Festival’s 2018 programme go to www.buxtonfestival.co.uk