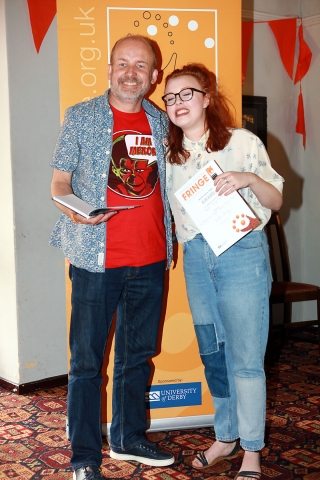 A successful Buxton Fringe concluded on Sunday July 24th with the eagerly-awaited Awards Ceremony at the Old Clubhouse.

Chair Keith Savage thanked performers and supporters including sponsor The University of Derby and a growing band of Fringe Friends, explaining that the intention of the ceremony was to “acknowledge and recognise the wonderful creative work that has been presented to us over the past 19 days”. He made particular reference to Underground Venues, which started in the basement of The Old Hall Hotel in 2006 but is marking its final year there following the redevelopment of The Crescent.

Whilst hoping they will find a new home in Buxton for Fringe 2017, Keith explained that the committee wished to give them a special award to thank them for “making the Fringe a much bigger and more prestigious event and for bringing people to Buxton who might otherwise not have come”.

In the more usual Fringe Award categories, Theatre saw the Production Award going to the compelling one-man show Waiting Room by All Things Considered Theatre with Acting awards being picked up by Daniel Holme for Skin of the Teeth and Helen Rutter for Human. The New Writing award, a cross-category one, was picked up by the writers of theatre show The Communist Threat, David Holmes and Kieran O'Rourke. The coveted John Beecher award for original, challenging work with high production values went to Raving Mask for The Conductor.

Comedy was another massive section packed with treats. The madcap Kagools ended up winning the Event prize with Charles Adrian picking up the Individual comedy award for Ms Samantha Mann's You Bring the Agony, I'll Bring the Aunt. In other categories, the phenomenal football-inspired show The Beautiful Game from Nottingham’s Next Door Dance won the Dance Award, Steve Larkin won Spoken Word with his prison-based N.O.N.C.E, and Mouth of Lions won the For Families award for their hit show Dr Zeiffal, Dr Zeigal and the Hippo that Can Never Be Caught. The event ended with a special Spirit of the Fringe Award to Buxton-based trombonist Sam Slide for his unfailing good humour, collaboration and tireless promotion of the Fringe and other performers. The full list of awards and nominations can be found on the Fringe website at http://buxtonfringe.org.uk/awards2016.html