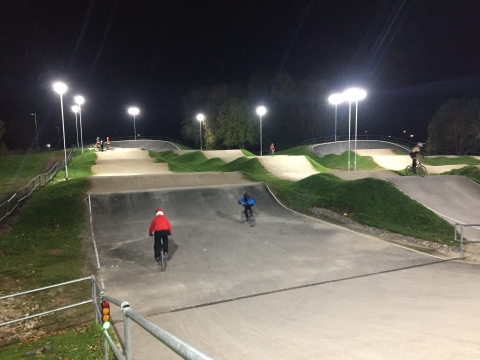 Derby BMX Club have been operating for over 10 years at Alvaston Park and have been involved in a partnership project with Derby City Council to undertake extensive improvements to the track.

The project started in 2014, with funding from Sport England and Derby Homes to undertake development of the track, including power to the site and floodlighting for the track.  Derby BMX Club were instrumental in the installation of the new electricity supply which has brought power to the track. This operates not only the new floodlights but the state of the art new starter gate installed earlier this year. The club hosted the British Championships back in August 2017, which was attended by over 5,000 people with 1,500 riders racing on the track.

Councillor Amo Raju, Cabinet Member for Leisure, Culture and Tourism, said: “We are fortunate to have the fantastic BMX facilities at Alvaston Park which enable young people to be physically active and get involved in their local community. Derby City Council are proud to have been a part of this partnership project which will provide a great boost for Derby and the local economy.”

Mike Ainsley, Chair of Derby Homes said, “We’re thrilled to have been given the opportunity to contribute to a project that will benefit the city, particularly one that draws in national events. The parks of Derby are a great resource for us all and the fact that many of our tenants live nearby was what led our Operational Board to approve the proposal.”

Derby BMX Club has approximately 90 active members of varying ages from 4 - 50+.  They hold regular evening sessions in the Summer but have previously been restricted to practising on Saturday mornings only during the Winter.  The new floodlights will enable the club to run three practice evenings each week and training sessions during the winter months, rather than having to travel further afield to Birmingham. It will also allow riders from around the East Midlands to use the track facilities in the city.

Dena Greene, Derby BMX Club said, “Getting the floodlights installed has been our target for a few years now. The floodlights will enable us to run evening track sessions all year round without the need for our riders, some as young as four, to travel to Birmingham and other floodlit tracks to train during the Winter months. We also hope they will attract new riders to the club, increasing our membership and raising the profile of the Derby BMX club.”

To celebrate the completion of the floodlighting project, Derby BMX club, along with the Derby Parks team are holding a special switch-on event during the evening of Friday 17 November 2017. The Mayor of the City of Derby, Councillor John Whitby, is hosting the official opening of the floodlighting from approx. 6.30pm. Derby BMX Club are planning a race evening from 7-9pm and the Friends of Alvaston Park will be attending to show their support.

As part of the celebration event the Mayor will lead a countdown to switch on the track lights and cut the ribbon to start the racing. The first lap will be sponsored to raise money for the charity ‘When You Wish Upon A Star’ which helps to send children with life threatening illnesses to Lapland. All the riders are being asked to get sponsorship and complete a lap of the track to raise money for the charity.

Max Plant (Midlands) Ltd provided the manpower for the installation of the new supply and TCS (UK) Ltd supplied and installed the floodlights and provided valuable support and advice both before the project started and recently during the installation period.