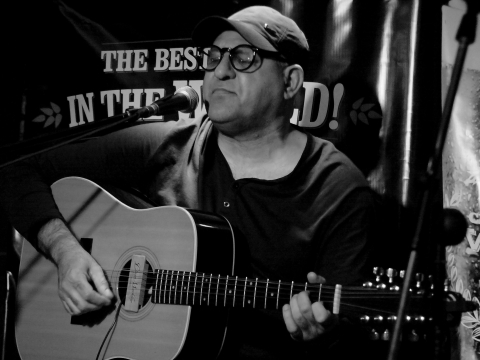 Circuit veteran Bluesman Mike Francis on his 40th Anniversary on the road, relates the Story of the Blues playing traditional and contemporary material from his celebratory new album being launched at the Festival. Rolling Stones biographer Martin Elliott is quoted as saying “If Woody Guthrie and Robert Johnson were alive today they’d probably sound like this guy” about Mike. “It’s easier to say who Mike Francis hasn’t played with” John Peel.

In 2013 Mike was nominated in the Solo Acoustic category of the European Blues Awards. This Story Show performance is one of many at European Blues Anniversary Showcase Events in Europe this summer. He adopted the title Bluesman in 2012 due to the tragic passing of the Italian singer of a similar name to avoid resulting confusion on internet searches. Mike reports “I haven’t looked back since and am really enjoying relating the evolution of the Blues as we know it today. I love the fact that such a diverse age group now enjoys this truly wonderful and timeless musical genre”.