Blast From The Past by Spiltmilk Dance 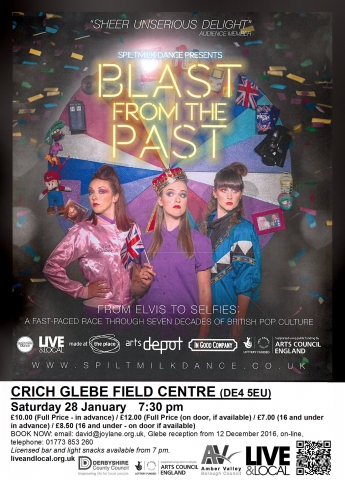 'Blast From The Past' takes audiences on a glitzy, fun, and sometimes silly, journey through the music, TV, fads and fashions that have shaped British pop culture since the recorded music charts began in 1952.

Each year is celebrated with a dance inspired by a key event or trend that impacted life in British living rooms that year, and is accompanied by the top selling song from the year. 60 short dances set to the top 60 tracks from the last 60 years. 1966 celebrates England's World Cup victory, accompanied by Tom Jones singing 'Green, Green Grass of Home', whilst 1981 harks back to Charles and Diana's wedding day, while ‘Don’t You Want Me' by The Human League plays. In true British style, 'Blast From The Past' invites audiences to team up and get stuck in with the fun, as the evening includes familiar rounds, brain teasers and challenges from iconic British TV game shows (such as 'Family Fortunes') - there will be prizes! Brought to us by Spiltmilk Dance – one of the UK’s leading professional contemporary dance troupes.