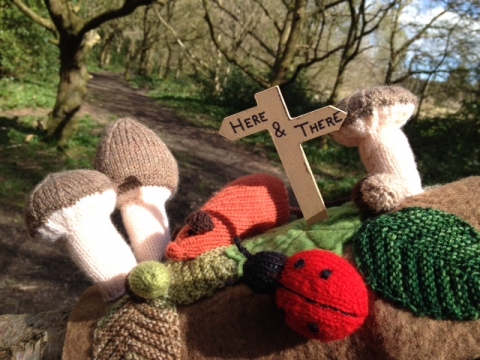 Belper Arts Festival 2017 is set to be the biggest yet as it incorporates theatre, art, music, dance, comedy, literature, photography and film. The  fifth Festival will run from 29 April to 29 May.
Confirmed so far are:

29 April DIVA (A new play by George Gunby). DIVA opens Belper Arts Festival 2017 … in Wirksworth. The reason will become clear! When Hollywood star Virginia Wilson returns to England things don't go as planned.
30 April / 1 May THE BELPER ARTS TRAIL incorporating live music, 'Word On The Street'  performances and 'The Writing On The Wall' temporary poetry trail. Captain Dan and his motley crew return for a third year of piracy and mayhem. With over 100 artists in 50 venues in the heart of Belper, the Trail attracts thousands over the two days of the Bank Holiday.
5 May ANOTHER TRIBUTE TO VICTORIA WOOD : Chris Foote Wood, Victoria's brother, will be hosting what will be a sell out evening for Cancr Research.
6 May A VICTORIAN DAY Chris Foote Wood will be donning his persona when he performs his one man show 'THE GENIUS CHARLES DICKENS'. This will follow an AN AFTERNOON CREAM TEA WITH OSCAR WILDE featuring the Don't Go Into The Cellar Theatre Company.
7 – 21 MAY  BELPER MUSIC FESTIVAL takes up residence in St. Peter's Church for a fourth year.
The popular Family Concert and the Last Night of the Proms will bookend evenings that will include jazz, piano and light classical music.
12 – 21 May WOOLLEN WOODS : Thousands of people of all ages visited the Parks Woods and were captivated by the knitted creatures. The Festival 2017 will  see an even bigger selection of the cuddly and the quirky.
13 MAY BIG BOOK DAY returns with meet the authors, workshops, poetry, performance and much more. A special workshop on self publishing will be a highlight.
15 – 21 MAY A series of events will mark DEMENTIA AWARENESS WEEK. Concerts, films, performance and a MEMORY CAFE will highlight how art can help health.
20 MAY SHAKESPEARE FESTIVAL  : ALL THE WORLD'S A STAGE A day of the Bard culminating in an evening of performance.
20 MAY SHIP OF FOOLS COMEDY at Number 28. A special Festival night of comedy.
25 – 27 MAY 'HAMP' is a play by John Wilson. Over 300 men were executed during WW1 for desertion. 'HAMP', directed by Larry Waller, leaves the audience with more questions than answers in this theatre classic.
27 MAY CHILDREN'S THEATRE SHOWCASE Local children's drama groups CAPTIVE AUDIENCE and FLIPPIN C CREATIVE combine to present a show highlighting the talents of local youngsters.
27 – 29 MAY BELPER OPEN HOUSES returns for a sixth year over the May Bank Holiday weekend.
Artists open up their homes and studios, welcoming the public to view and buy. Around 30 venues will host an estimated 50 artists.

“It's a great start to the Festival programme,” said George Gunby, Chair of the Festival 2017.
“We've never had so many events confirmed this early. There's more in the pipeline and by the deadline of 31 January I'm sure we'll have the best programme yet. As usual, we are looking for sponsors and advertisers to help us deliver the Festival. Volunteers will be made very welcome.”
For more details contact GEORGE GUNBY (Chair / Co-Ordinator) 31a Field Lane, Belper DE56 1DD
TELEPHONE 07847 478250  EMAIL nonnel@sky.com
or via www.belperartsfestival.org