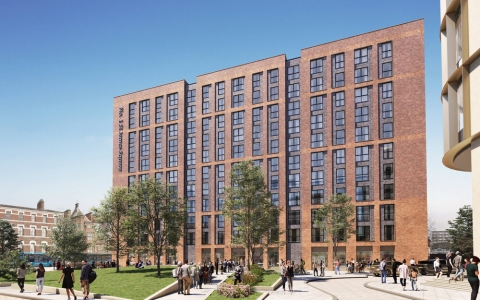 Development work on Derby’s £200 million Becketwell regeneration scheme will begin this spring after detailed planning permission was granted for the first phase.

The company will now be able to start work on phase one of the scheme, which includes the construction of 259 build-to-rent apartments on the site of the former Debenhams store on Victoria Street.

Paul Morris, development director at St James Securities, said: “We are delighted that planning has been granted for what will be a landmark regeneration scheme for the city."

A new public square, on the site of the former Central United Reformed Church, remains the centrepiece of the development and will also be delivered as part of the first phase.

Work is already underway to bring forward a second phase to comprise a new 3,500-capacity performance and conference venue on the site of Laurie House offices and the former Pink Coconut nightclub.

Future planned phases of the scheme include a range of other complementary uses of the site, including up to 25,000 square metres of grade A offices and commercial space, a hotel and a multi-storey car park.

More than 2,000 jobs are expected to be created by the development.

Mr Morris said: “We and our wider team of consultants have been working on the scheme for more than three years.

“To receive a unanimous decision from the planning committee is a vindication that our scheme is the right fit for the city and will provide the impetus to kick-start further investment.

“Gaining detailed approval will mean that we can now get onto site. At present, the programme is showing a start of works in May, with completion at the start of 2023.”

Councillor Matthew Holmes, deputy leader of Derby City Council and cabinet member for regeneration, planning and transportation, said: “A thriving city centre is vital for Derby’s future economic prosperity and this project will be transformational - allowing hundreds of people to live in high-quality homes in the heart of the city and breathing new life into an area which has been challenged for many years.”

The scheme also has the support of a number of local stakeholders, including Marketing Derby.

Managing director John Forkin said: “We are delighted that planning has been approved for what is a crucial step in taking forward one the city’s regeneration priorities.

“There is much talk about the need to repurpose city centres and by creating new quality homes for 500 people in the heart of Derby, St James Securities is doing exactly what is required.

“This is an important piece in a bigger jigsaw that will not only develop the Becketwell site but also act to build confidence for further investment in Derby.”