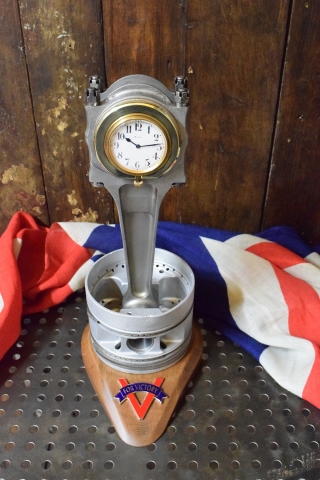 Ashby Interiors, a new small business run by Martin and Rachel Ashby and based in Derby, are proud to announce that they have launched their V for Victory range in support of the Royal British Legion.

This remembrance period (and up to 31 December) Ashby Interiors will be donating 5% of the sale price for all items sold from their Ashby Aero range.

The V for victory range is based on a rare collection of World War II aircraft engines including Battle of Britain aircraft which have been transformed into decorative items such as clocks, lights and sculptural pieces.

‘Derby is the aerospace heart of the UK.  I worked at Rolls-Royce for 24 years and was third generation Rolls-Royce in my family so you could say it is in my blood! Many of our engines were made and designed here in Derby and are now back in the county once again, being re-manufactured for a new purpose in their life. Everything we sell is recycled or reused which is really important in today’s society, to combine recycling with luxury and rarity is key to what we do. Our support of the Royal British Legion is two-fold, the Battle of Britain engines bring with them the story of the aircraft that fought during World War II and you can’t help but be filled with awe at the bravery of the pilots who flew them.  I also have a Great, Great Uncle who died during World War I’