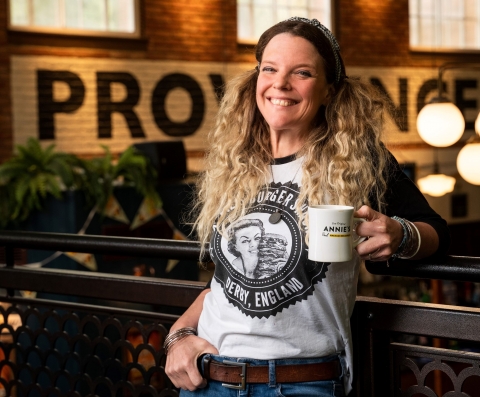 A Derby restaurant has launched its first-ever family meal deal to encourage households to come into the city to enjoy a bite to eat without worrying about the effect on their wallets.

Annie’s Burger Shack, in Friary Street, has kicked off the summer holidays by offering families of four a choice of its burger menu for less than £30 all-in to help them cope with the cost-of-living crisis.

Consisting of two adult burgers from the restaurant’s gigantic 34-strong burger menu, two kids’ burgers – of which there are seven available – and two Fruit Shoot drinks, the deal was launched to coincide with the start of the school holidays this week and comes to a close at the start of September.

The restaurant, which is a popular venue for families thanks to its huge range of authentically American burgers, all of which are available in vegan, veggie or meaty, has already upped its offering by running events including quizzes and singalongs to keep diners coming through the door.

Owner Annie Spaziano said she wanted to create a financial safe space for families who wanted to enjoy what her restaurant offers by giving them an affordable fixed price to ensure that they don’t miss out on a summer treat.

She said: “Eating out has become a way of life for families now, it’s what they do to come together and socialise, and so we wanted to do what we can to recognise that times are a bit tougher these days and people are having to make some tough choices.

“We’re very aware that families could stay at home and have a takeaway for just a little bit cheaper, but it’s very important that people continue to come into the city to share the atmosphere and human interaction that you only get at our restaurant.

“So far the uptake has been really good and we hope plenty of families take up the offer. The price won’t change throughout the summer so it’s a financial safe space because they know what they will be spending before they get here.”

The offer is also being run at Annie’s Burger Shack’s restaurant in Nottingham and for more details visit www.anniesburgershack.com