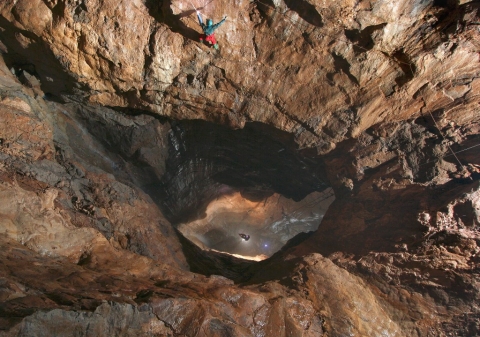 Abandon Normal Devices (AND) Festival returns for the 8th edition this September.  Descending into the caves and shafts of the Peak District National Park, world class artists and filmmakers will mine the earth’s layers through virtual and artistic experiments which invite prophetic, provocative and uncanny reflections on the verticality of the earth.

AND Festival explores the earth from above via bewildering aerial views, to the below, turning the peaks and caverns of Castleton into a subterranean laboratory for artists, filmmakers, geologists and scientists.

The roaming biennial festival of digital culture, art and film is a mix of free and ticketed events.  Further details on the programme, featuring unusual and unexpected installations, workshops, exhibitions, and an eclectic mix of subterranean adventures and film events, will be released over the coming months.  Visit www.andfestival.org.uk

AND Festival 2017 invites you to abandon your normal devices and experience the landscape anew.