11.2% growth in MD's first year at The Derby Conference Centre 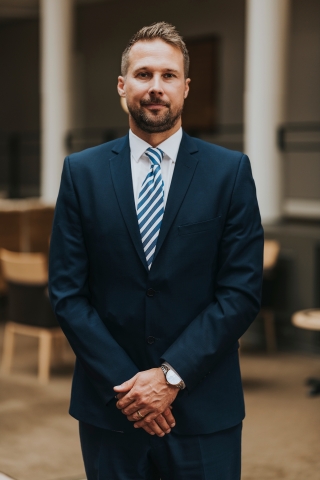 Matthew Hutchings has celebrated his first anniversary as Managing Director of The Derby Conference Centre - one of the leading events and conference venues in the East Midlands. His first year in charge has marked some big changes at the Conference Centre, with Hutchings’ leadership taking the venue from strength to strength.

Hutchings started his career in hospitality at the age of 16. Since then, he’s opened two hotels and, after taking the reins from Mike Ebbitt in 2018, has changed the way the public see The DCC. Since his takeover, Hutchings has overseen a sleek new rebrand and orchestrated £270,000 worth of renovations. These efforts have seen sales grow by 11.2% - giving the venue one of it’s most successful years to date.

The initial focus for Hutchings was the aforementioned rebrand, which focused on the initials DCC. Diversifying the brand, the change in look-and-feel focused on the six core functions of The Derby Conference Centre. Where before the venue was known simply for conferences, the repositioning of The DCC brought the other five functions into focus - Hotels, Meetings, Events, Weddings and Offices. In addition, the rebrand brought a new restaurant and lounge to the venue.

Hutchings has seen in the launch of the DC Comedy club at the start of 2019. The Comedy Club sees comedians from all over the country converge on Derbyshire for outstanding comedy nights. It’s something entirely different to everything else on offer in Derbyshire - and well worth the trip.

The DCC partnered with OYO Hotels earlier in the year, providing the venue with top-notch accommodation that guests can book through the OYO app. Earlier in the year, the Conference Centre was also a finalist for Business Venue of the Year at the East Midlands Chamber Awards. Hutchings said that this was his proudest moment as MD - a culmination of the hard work of his whole team:

“Without an amazing team, you can’t deliver exceptional standards and service, and the team here at The Derby Conference Centre is nothing short of amazing. It’s been a fantastic year, and everyone who works here should be incredibly proud of what we’ve achieved. Here’s to many more years to come!”

In addition to his work at The DCC, Hutchings has recently announced his role as a mentor for Springboard GEMS, supporting the University of Derby. As a mentor, Hutchings will be coaching a final year student through their last terms at University and into the start of their career.

What a year 2019 has been for Matthew Hutchings and The Derby Conference Centre - and 2020 looks like it’ll be even better. The MD’s main goals for next year include continuing to be a destination of choice for small and medium conferences in the East Midlands, to be a primary weekend conference and leisure destination and to be as competitive as possible in the mid-range hotel market.

To find out more about Matthew Hutchings and The Derby Conference Centre, take a look at thederbyconferencecentre.com.