“He will forever be our guide and inspiration”: Drystone founder and folk legend Mick Peat dies aged 80. 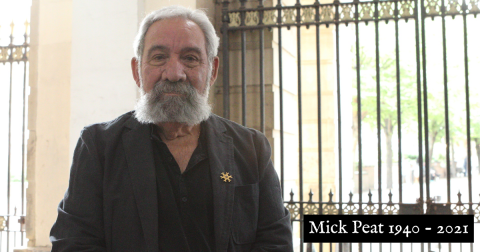 It is with deep sadness we announce the death of our dear friend and founding President Mick Peat after a short illness.

Mick left us on January 22nd. We extend our sympathy and love to his wife Celia, his family, and his countless friends across the world of music.

The news has hit the folk music community hard, and tributes have been pouring in from all over the country and beyond, many praising Mick’s kindness, generosity of spirit and guidance in their own musical careers.

Separating Derbyshire, folk music and Mick Peat is a pointless exercise – they are so inextricably linked. Ripley born Mick began performing at Alfreton’s Upstairs Cellar in the 60s before setting up his own folk club and with The Ripley Wayfarers toured professionally with numerous tv and radio broadcasts, recording 6 albums over a 25-year period.

Mick’s next venture, alongside Barry Coope, was the highly acclaimed Rogues Gallery who went on to perform and create the music score for The Northern Mysteries in a record-breaking run at Sheffield’s Crucible Theatre, coincidentally in a version by John Tams.

Mick was one of the longest serving presenters and best-known voices on BBC Radio Derby with his Folkwaves show - a 25-year tenure syndicated across the East Midlands. Following the Boxing Day Tsunami of 2004 The Derbyshire Volunteers was formed and remains ongoing – a free-giving assembly of local musicians intent on raising charitable funding and Mick was the first in line.

"Life without Mick in it can't yet be fathomed. The world of all things Folk, Derbyshire, and beyond is so fortunate to have had Mick in it, and his legacy will be far reaching."

Mick holds the Andy Potter Award for Services to Community Arts and was recently awarded the prestigious “Gold Badge” from the English Folk Dance and Song Society. He lived in Fritchley, Derbyshire.

Drystone was his latest project, a not-for-profit endeavour to rebuild the arts in Derbyshire and beyond following the devastating effects of the Covid-19 pandemic. As a founder and President, along with his friends and fellow musicians he was instrumental in bringing the project to fruition.

John Tams, our Artistic Director and Mick’s friend for over 50 years said, “The stage has emptied, the lights are dimmed but we will capture his flame and carry it forward. He will forever be our guide and inspiration and always in our thoughts.”

If you would like to leave your condolences or share your memories of Mick, please email them to drystonearts@gmail.com and we will add as many as we can to our website in a permanent tribute.